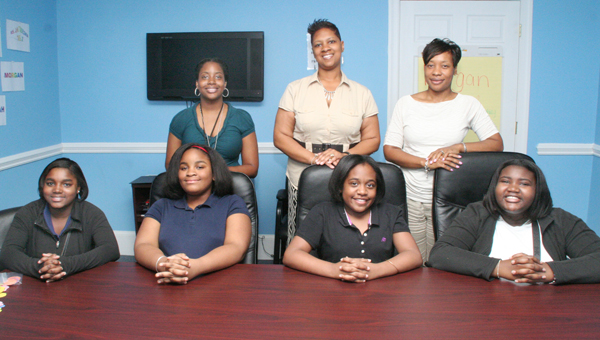 AHOSKIE – Similar to a farmer tilling the soil to produce a bountiful harvest, the work of a local organization is tasked with cultivating the hearts and minds of young girls in grades 7-9.

Each weekday afternoon for two and one-half hours, a foursome of 13-year-olds continues to be fed from the educational table. They are bused to 411 West Main Street in Ahoskie where additional lessons in life are to be studied and learned. Welcome to Fiona’s House.

Named in memory of the late Fiona Lawrence, Fiona’s House is the product of Rural Initiatives Changing Communities Everyday (RICCE), a non-profit organization whose start-up support came by way of Integrated Family Services (IFS) based in Ahoskie.

Fiona’s House is a STEM Leadership Academy program designed to develop the character, mentality, and educational discipline of 7th through 9th graders enrolled in Hertford County Schools that have shown an interest in pursing careers in science, technology, engineering and mathematics. This program provides tutorial assistance afterschool and the opportunity to strengthen problem solving skills and the ability to respond quickly in spontaneous situations. 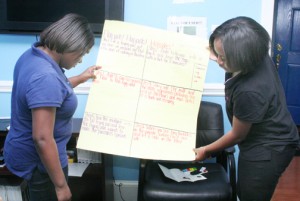 Nyasiah Parker (left) joins with Morgan Chadwick in one of the team-building exercises offered at Fiona’s House in Ahoskie. Staff Photo by Cal Bryant

“Our mission is to provide young ladies and their families with quality services that will promote, empower and enhance positive self awareness and community building that will afford these young ladies with the knowledge, confidence and tools necessary to reach their highest potential,” said Natasha C. Holley, an IFS Clinical Director and one of the Administrative Directors at Fiona’s House.

Holley shared the story of Lawrence, saying she was a graduate of the Hertford County Public School system who later in life opted to make a difference in the local community by going back to school to become a physician’s assistant. She was enrolled as a medical student at Duke University and was on the verge of completing her studies in 2012 when she unexpectedly died just two weeks shy of graduation.

“Fiona was firm in her dedication to providing quality health care services, promoting self-awareness and community building,” Holley noted. “She was employed by IFS and was instrumental in the establishment of RICCE, Inc. This way our way of honoring Fiona and giving something back to the community at the same time.”

Holley gave credit to her fellow Administrative Director, Anthony Manley-Rook, for coming up with the idea of Fiona’s House with the STEM concept.

“Anthony and Natasha came to me with this idea and I jumped onboard,” Heckstall said. “I love every minute of it. I have watched them go from adolescence to becoming teenagers. Watching that change has been amazing.”

The “first four” – now seventh graders – will continue with the program until they complete their freshman year of high school. Along the way, as many as seven others can join the program each year and follow the same cycle.

“The idea of Fiona’s House is to reach those young girls in this particular age range, recognizing that if we can help mold and shape them then we’ll see positive results at the end of the cycle,” Holley remarked.

“We have a great group of girls, they’re very outspoken,” Heckstall observed. “They are blossoming, emotionally and physically. Two are now enrolled in dance classes; two others are members of the Beta Club. They have other activities outside this program, but we remained focused on helping them further develop their social skills so when they’re out in the community they’ll be able to adapt to the environment.”

As far as recruiting local young girls to join Fiona’s House, applications are sent to Riverview Elementary and Ahoskie Elementary. All 6th graders are eligible to apply. That list is narrowed down by a committee and the finalists are chosen to join. Four rising seventh graders have been selected to join with the first four at the start of the 2015-16 school year.

There is a $25 program fee per month for those enrolled. That helps offset the costs of the programs at Fiona’s House.

“We are currently seeking corporate and individual donations to help us help these young girls,” Holley noted. “We’re also planning to conduct other fundraisers, the first one coming up June 5.”

Heckstall said another key element of the program is having the girls involved in community service activities.

“This year they chose to work with the Feed America program,” she said. “They have identified another local youth group who they have challenged to match or exceed raising funds or food products for the Food Bank of the Albemarle.”

Fiona’s House also benefits from the work of tutors. Two hail from the community of Gates – Jacquesha Harrison and Krystina Smith.

Harrison works as a Kindergarten teacher at Riverview Elementary and makes the afternoon drive from Murfreesboro to Ahoskie to work at Fiona’s House.

“I was sold on the idea of Fiona’s House from the very start,” Harrison said. “I can see myself, when I was younger, through the young girls now enrolled in this program. I try to steer them in the right direction.”

Smith is a student at Roanoke-Chowan Community College.

They have also engaged in team-building exercises as well as sharpening their oral presentation skills. Heckstall said both of those elements are critical in the development of this age group.

“I realized just how quickly this first group had matured when they asked to be included in the selection process of the next group,” Holley stressed. “They sat in during our board meeting when we screened those new applications. That shows leadership skills.”

Those two groups will meet this summer when Fiona’s House plays host to a cook-out.

For now, the “first four” – Brianna McCullough, Jabria Lassiter, Morgan Chadwick, and Nyasiah Parker, all of Ahoskie – are completing their initial year in the program and, for each, they can measure their individual success.

“We’ve learned a lot about leadership and how to speak in public…how to try new things,” said McCullough. “It has taught me a lot about organizational skills.”

“I learned about how to be honest and trustworthy,” noted Lassiter, “and how to be more independent.”

“I learned more about how to better respect others and how to be honest and how to improve my leadership skills,” Chadwick admitted.

“I’ve gained confidence in public speaking, and being a leader,” Parker remarked.

Each of the girls said they would highly recommend Fiona’s House to their younger siblings and friends.

For more information about Fiona’s House, call 252-439-0700 or send an email to jheckstall@ricce.net.