JACKSON – A Conway man is behind bars here, held under a $200,000 bond, following his May 11 arrest for trafficking opium or heroin. 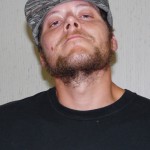 Michael J. Mager stands charged with two felony counts of trafficking the illegal drugs. He made his initial appearance on Tuesday in Northampton County District Court.

According to Lt. A.J. Thomas of the Northampton County Sheriff’s Office Narcotics Division, officers noticed a suspicious vehicle entering an area of Conway known for high crime and drugs.

Thomas said the vehicle was stopped for a minor traffic violation and there were two occupants inside of the vehicle; the driver, Sanja Palmer of Kannapolis, NC and Mager as the front seat passenger.

Further investigation of the vehicle yielded a large quantity amount of opiates.

Palmer was cited for running a red light, and Mager was arrested and charged with two counts of trafficking opium or heroin.

“The Northampton County Sheriff’s Office will continue to investigate any and all leads of illegal drug activities in our county. I would like to thank our Narcotics Division for their effort in this case,” stated Sheriff Jack Smith.