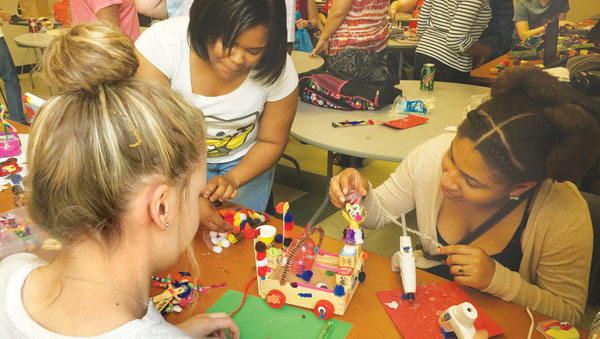 Hertford County Early College students work on projects at the Maker Faire, a day of arts and crafts from the traditional to the high tech. Students (from left) Shelby Cooke (back to camera), Akiya Russell, and Shakira Gay work on their designs. Contributed Photo by Addison Hoggard

AHOSKIE – Some STEM students may be making robots out of toy building blocks. At Hertford County Early College High School some of their peers are doing them one better.

They made a robot out of a toothbrush.

Students of all ages gathered at Hertford County Early College High School at Roanoke-Chowan Community College in Ahoskie on April 18 to tinker and toy – and to create in something called the “Maker Faire”. 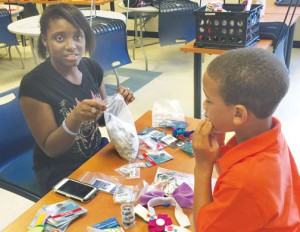 Deonshae Vinson and Jordan Staton were a couple of the elementary and middle school students participating in artworks projects at Maker Faire. Contributed Photo by Addison Hoggard

The Faire, held in partnership with the Hertford County High School Video Game club and Terri DeCresie, the District AIG Coordinator, and was an event designed to get students thinking in a new way.

“The Maker Faire allowed students to experiment with new technology, and to even build tech of their own,” said Jennifer Smyth, an English teacher at Hertford County Early College High School and an advisor for the Video Club. “The Maker Movement in education encourages hands-on project-based learning and is tied to the STEM curriculum (Science, Technology, Engineering, and Math), but can be used across all subject areas.”

Maker Faires are the manifestation of these ideals, where students can come together and are encouraged to create and think critically.

Students were playing Minecraft, an independent video game which allows players to build constructions out of textured cubes in a 3D procedurally generated world; a far cry from, say, Candy Crush.

The designs were built on Raspberry Pi’s (an open platform credit-card sized computing device), with students also designing their own robots, and even hacking toys to create something entirely new. It provides a unique way to ‘think outside the box’.

“The best part about it was watching students from ECHS share their knowledge and skills with younger students and parents,” said Smyth. “By the end of the day, everyone was involved, and it was also wonderful to watch younger students sharing their new expertise with each other and showing off their makes to their parents.” 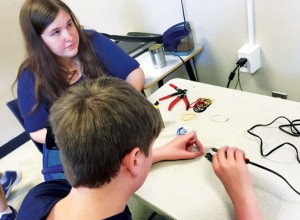 Several Hertford County Early College students were there, aiding the younger students in their quests of creation. Alissa Harrell, a member of the HCECHS Video Game Club, created a piano out of Play-doh and a MaKey MaKey, which she explained to be a “hard drive that you can hook up to your computer that allows you to create controllers out of anything.” She was ecstatic to teach students how to play the piano using Play-doh, which was a unique experience in and of itself.

One young student, Tamia Britt, expressed joy over the new things she had experienced at the Maker Faire. She was most excited about “toy hacking,” or taking apart toys and fusing them together to create something new and unique.

It’s pretty cool that you get to make your toys into different designs and robots,” Britt said.  “I took my horse and made it into a dinosaur.  You can take anything and make it into a robot.”

Another Hertford County Early College student, Shakira Gay, talked about her experience toy hacking and what she learned.

“It gives me the ability to create anything that I want—to create whatever comes to mind,” said Gay. “It’s pretty cool that you get to make your toys into different designs and robots.  I took my horse and made it into a dinosaur. The world is limitless, and you can do pretty much anything with anything.”

Renee Jones, a parent that attended her first Maker Fair with her children, was most appreciative of the opportunity it provided.

“This Faire is an excellent opportunity for the children,” Jones noted.  “It’s a really good experience for the kids to be able to interact with things and technologies that are on a higher level.”

DeCresie said she was most excited about “paper circuitry,” which is a way to add lights to drawings and origami.

“It’s a wonderful opportunity for these students to come and make things that they typically wouldn’t get to make in a regular classroom,” she added.

“On a personal level, I had a great time talking with students of all ages,” said Smyth. “I had really interesting conversations about how conductive thread behaves like wire, properties of belts and gears, springs versus batteries as energy sources, and fixing soldering mistakes. ECHS students have already asked when we can do it again; we’re hoping to host two Maker Faires next year, one in the fall and another in the spring.”

Addison Hoggard is a senior at HCECHS and will be attending UNC-Asheville in the fall.  Addison is graduating from the five-year program in four years and in June will receive both an Associate’s Degree and a high school diploma.