In eleven years of coaching, he’s seen quite a few.

Despite spending every half-inning in the third-base coaches box, Kravitz could have just been another baseball fan Tuesday night here as his Warrior team needed extra innings to dispatch a tough, scrappy, Terra Ceia Christian School team, 3-2, in nine innings and win the Tarheel Independent Conference tournament championship.

Sophomore Jarrett Harrell, who began the game behind the plate, but finished it on the mound, picked up the win in relief of starter Nicholas Holton.  Harrell also went three-for-four at the plate and drove in a run.  Teammate Drew Williams drove in two runs, including drawing a walk for the game-winner with two-out in the bottom of the ninth.

“It was good to get the win,” said Kravitz after the contest as his team celebrated their 9th title in 11 years. “This was almost like a playoff game, and we needed that heading into the post-season next week.”

Kravitz continued, “Austin pitched a great game and give (Coach) Jason (Wynne) credit, because he coached a heck of a game to keep his team in it.”

Lawrence got on the board first with a run in the bottom of the first inning, and based on their usual dominance, fans might have been expecting a short affair; but they’d have been very wrong this night.

Tyler Jones smoked a Roscoe fastball all the way to the fence in centerfield for a double, then stole third, and came home on Williams’ sacrifice fly.  It was 1-0, Warriors, after one.

Terra Ceia struck back in the top of the second when Lelon Stotesberry doubled into the gap in right-centerfield.  He took third on a groundout and was able to score from third when the Warriors threw the ball away trying for a double-play. That evened the game at 1-1- after one-and-a-half.

Lawrence had a chance to capitalize in the bottom of the frame, but instead left the bases loaded when Roscoe pitched out of a jam.

The Knights went in front in the top of the third.  With one-out and the bases loaded, Hendrix hit into what looked like a double-play.  Instead, he was called safe at first on the fielder’s choice and a run scored to make it 2-1, Terra Ceia.

Roscoe then retired six of the next seven Lawrence batters he faced before running into trouble in the bottom of the fifth.  Tyler Jones got a base hit up the middle, was sacrificed to second, and came home with the equalizer when Harrell singled to left.  But the Knights avoided more damage and the game was knotted at 2-runs apiece.  It remained that way into the seventh.

Harrell relieved Holton in the top of the seventh and went three up-and-three down.  Roscoe, still strong on the hill, did the same and the game went to extra innings.

In the top of the ninth, TCCS’ lead-off batter reached on an error by the second baseman.  The next batter tried to bunt him over and Harrell, trying to make a play on the ball, threw it past first base, putting runners in scoring position with nobody out.   But Harrell worked through the jam: first with a pair of strikeouts, and then an unassisted out on a grounder taken by infielder DaQuan Wilson, who outraced the Knights’ Quentin Van Essendelft to the bag on a close play at first.

Roscoe opened the bottom of the ninth with a strikeout, but walked the next batter, Miller Trowell, before Coach Wynne came out to relieve him.  Hendrix entered the game but had trouble with his control and walked two batters to load the bases before getting the inning’s second strikeout.  Williams came up to the plate next and coaxed the count full before Hendrix’ final pitch sailed high and Trowell walked home with the game-winner.

Williams, Jones, and Nick Holton were named to the All-Tournament Team from Lawrence, and Harrell was named the game’s Most-Valuable-Player.

“We might’ve been overlooking them,” said Kravitz with a sly smile, “but we pulled it out; and sometimes you just have to be lucky.” 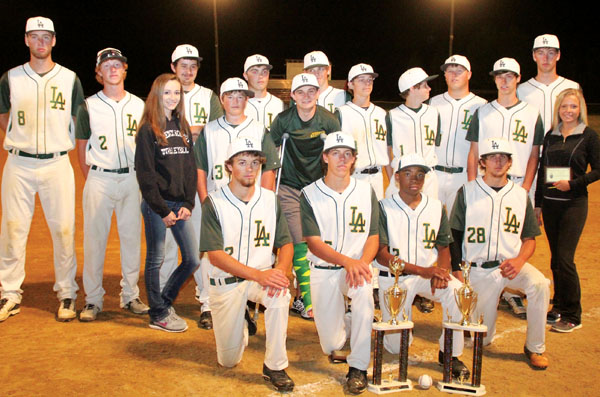