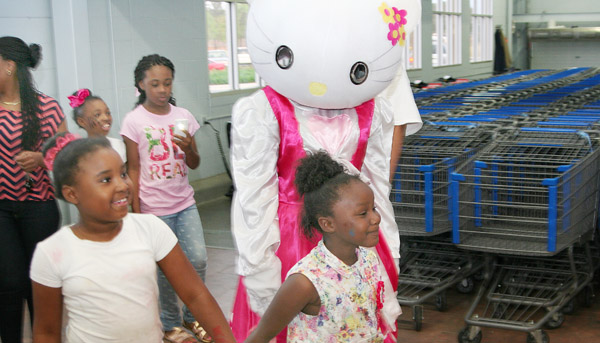 AHOSKIE – It was a whirlwind four days for Azariah Goddard.

On Tuesday night of last week the six-year-old lost many of her personal possessions in a fire at her Winton apartment home, believed to be the tragic consequences of an unattended stove.

After spending the next few days with relatives and friends, Azariah’s mother, Stephanie, was left wondering what she could do to cheer he daughter; not only from her loss, but also because her seventh birthday was on Saturday. 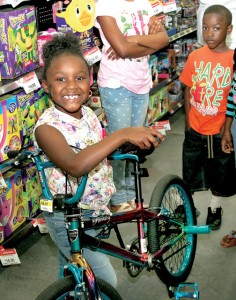 Azariah Goddard is all smiles as she poses with one of her donated birthday presents, a brand-new bicycle. Staff Photo by Gene Motley

“A lady I was in school with had posted in Facebook to keep the Goddard’s in prayer because they had lost everything they had,” said Joseph Powell, Jr. “Later my wife told me her cousin had lost everything in a house fire, and so I checked the facts and put two-and-two together.”

Powell, whose friends call him “Ghost”, decided then to put his ‘second job’ to work, Powell’s Fun-Sized Animations, as a way to help.

Fun-Sized Animations feature Powell, his wife Crystal, and their church friends dressed as some 11 cartoon characters for parades, birthday parties, festivals, and other events for the delight of children.  The Powell’s founded Animations as a comfort for their bereavement over the death of their infant son over a year ago.  In less than a full year, they’ve done over 100 events and parties.

“We asked God to give us something in my son’s memory and a vision came to me to do this for kids,” Powell says. “I never knew we would touch so many folks, and that it would be so big.”

Powell said when he toured the burned-out apartment and saw Azariah’s charred room had been decorated in the pink pastels of the cartoon character, ‘Hello Kitty’; he knew he had found his inspiration.

Move ahead to Saturday where the community held several fund-raisers to aid the Goddards including a car wash, and the cousins even held a birthday party for Azariah at the Ahoskie Creek Park Amphitheater, but the real surprise awaited at the Ahoskie Wal-Mart.

After saying no more to the Goddards than to meet him at the Superstore last Saturday evening; Powell set things in motion, with the store’s permission, for a special $500 birthday gift shopping spree for Azariah.

Driving his mini-van and with the sound-system blaring the Hello Kitty song, Powell pulled up in front of the store and it was obvious from the astonished looks on the children’s, as well as the adult’s, faces the act of benevolence had taken the Goddard’s completely by surprise.

Azariah’s face was all aglow with wonder, fascination, and anticipation as she stared wide-eyed at the Hello Kitty character in the pink-and-white costume with the large foam head that took the child by the hand and led the youngster into the store to begin the shopping extravaganza.

With her young cousins in tow to assist with her selections, Azariah headed for the Toy Department where she picked out several notable items, particularly a Nail-Art set, a doll with all the accessories, and a shiny new bicycle.

“She lost all of her nail art in the fire,” said mom, Stephanie later. “The main thing she loves to do is her nails.”

Following the 20-minute romp through the toy aisles, Azariah was checked out, and awaiting her on the south end of the building, friends had gathered with a cake and presents for a second impromptu birthday party.

“This actually turned out better than I expected and I can’t take any of the credit,” said Powell. “With the help of all these people we all pulled together as a community and that’s what made this happen. It shows what can happen if we all pull together as one. This is just one situation out of many if we’re going to begin to change the lives of people.”

For Stephanie, who also received a shopping spree, but postponed hers for the sake of her daughter, the entire day left her searching for words and overcome with emotion as she tearfully stood in the evening sunset.

“I don’t know what to say,” she said, fighting back tears. “I’m just so thankful for people coming out and supporting us in the community.  With all the prayers and support we’ve had I know we’ll get over our tragedy.  It’ll take a while but we’ll move on.”