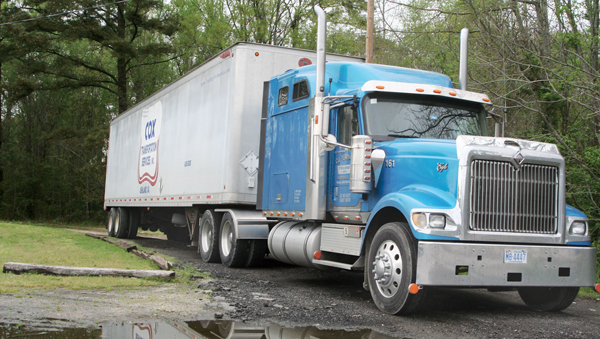 The Ahoskie Town Council still continues to wrestle with the question of the parking of semi-trucks (like this one at Gerock Street and Carolina Avenue) in residential districts within the town limits. Staff Photo by Gene Motley

AHOSKIE – For now, they can ‘keep on trucking’.

The issue of enforcing, revising, or amending Town Ordinance 38-139, which prohibits the parking of a semi-truck in a residential district, entered its seventh month of discussion at the latest meeting of the Ahoskie Town Council.

What began in October with the Council allowing one town resident to park their semi-truck on their own property has now progressed without the Ahoskie governing body making a definitive decision on the issue of how, why, and to whom such parking of these vehicles apply.

In October, L.R. Bishop requested, and was granted permission by the Council to park his semi-truck on his property because of its location just off a marked truck route (US-13 Business).

In November, Ahoskie Police Chief Troy Fitzhugh, as directed by Council, found there is no municipality within 50 miles of Ahoskie that allows semi-truck parking in a residential district, and the Chief recommended that the ordinance prohibiting such parking be enforced.  Meanwhile, the Bishop’s were allowed to continue to temporarily park their vehicle on their property while the issue is still unresolved.

One month later, at the December meeting, Council recommended that the Ordinance be changed to allow semi-truck parking in residential neighborhoods as long as the neighborhood was located along a truck route.  City Attorney Buddy Jones drafted an Ordinance to comply with Council’s request.  Meanwhile, Council was informed any changes in the town ordinance must go through a public hearing, with one scheduled for January’s Council meeting.

In January, Council was provided a draft Ordinance stating no overnight parking in residential districts except taxpayers residing on a truck route on their own property.  The truck could not contain hazardous materials, could not affect the visibility of motorists, and be reasonably shielded from the view of neighbors.  The Bishop’s request received another reprieve.

February brought no public hearing, but more discussion with no resolution.  This time, Council received data on what constitutes a truck, truck weight limits, and a recommendation to grandfather in the trucks now parked on Catherine Creek Road which had parked there prior to the adoption of Ordinance 38-139 in 1976.  Still, no vote was taken on the Ordinance or the new one, for which a public hearing would be held; and the Bishops were allowed to continue to park their truck at their residence.

In March came revelations of more semi-trucks being parked at various Ahoskie locations.  After discussion, Councilwoman Elaine Myers made a motion to keep original Ordinance 38-139 which she and Councilwoman Linda Blackburn voted for, but Councilman Charles Freeman and Councilman Maurice Vann voted no, and a deciding no vote was cast by Mayor Brien Lassiter. Councilman Rev. C. David Stackhouse had an excused absence from the meeting.  The Bishop’s privilege was again continued.

At Tuesday’s April 14 meeting there were three options presented: enforcement of Ordinance 38-139 as written, but including grandfathering in vehicles parked at residences before the Ordinance was adopted in 1976; the new Ordinance drafted by the attorney, allowing certain parking; and a still separate Ordinance reflecting new weight and vehicle classifications – the latter two requiring a public hearing.

Stackhouse made a motion to enforce the current Ordinance, including exceptions under the grandfather clause.

As discussion began, Jones mentioned that annexed areas since 1976 would fall under the grandfather clause.

“If someone started parking after 1976, I don’t know how you can grandfather them,” Jones continued, “because they started after the adoption of the ordinance.  I think you need to treat everybody the same.”

Jones stated that the ordinance, as drafted, speaks to three-quarters of a ton capacity, and that trucks routinely used of that weight are parked all over town.

Lassiter suggested getting away from the three-quarter ton definition and getting more with trucks exceeding 16,000 pound weight and Class-4 capacity as defined by the state Department of Transportation.

Jones concurred, pointing out that there were probably 30-40 pick-up trucks parked at residences that would be in violation of the ordinance under the limited definition.

“It might be that Council would want to make an exception for a school bus,” said Jones.

Freeman said the definition should get back to a truck and a trailer, as in the original ordinance, or the second option.

Blackburn made another plea for a public hearing – required for the second (amended ordinance) or third (weights & class) options.

“That gets the semis out of town right now with the exception of those people who were parking there prior to ’76 when it was written,” the Town Manager said. “Or you can direct the staff to develop (a new) ordinance with classes and weights and bring it back here for a public hearing.  That would change it next time to allow for more modern (vehicle) parking.”

Freeman stuck to his conclusion that Council would be better off having something in place more definitive.

“We would put it on a complete package, and not a piecemeal deal,” Freeman said. “I think we’d be more responsible if we had one clean-cut issue and we voted on it.  We need to come in here with classifications, of where they can park, and we vote on it, and that’s the end of it.  That’s what we need a public hearing for.”

Jones said a public hearing on the proposal to tie parking to residential neighborhoods by vehicle weight would be the cleanest thing to do.

Hammond again threw his support behind the current Ordinance 38-139.

“Leave it enforced as it currently is to get rid of the semis out of town and set a public hearing for next month for weights and classes to modify the ordinance after that public hearing,” Hammond stated.

Lassiter pointed out that a violation of the current ordinance is a Class-3 misdemeanor.

“If you go out and write semi trucks a ticket for parking under the 1976 Code (three-quarters of a ton), and you don’t write up, say, a church mini-van, then these people go to court charged with a Class-3 and argue who did and didn’t get a ticket,” Lassiter said. “What that’s going to look like in a court of law? I don’t know.”

Jones suggested a continuance, having a public hearing, and adopting something that includes language regarding vehicle weights.

Blackburn concluded discussion with the hope there is a large public turnout at the May public hearing for citizens to voice their concerns.

Stackhouse then made a motion that the moratorium on enforcement of Ordinance 38-139 be continued one more month and that a public hearing be scheduled on the issue for the May 12 Town Council meeting.  It was seconded by Freeman and passed unanimously.