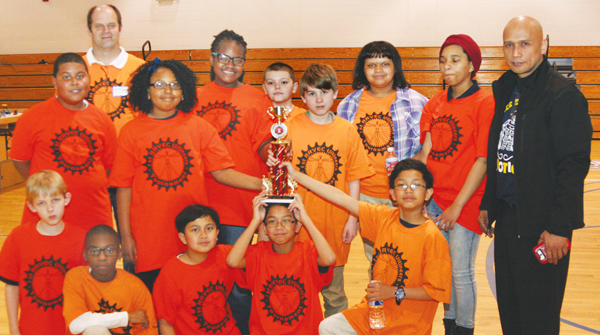 2) A robot must obey the orders given it by human beings.

3) A robot must protect its own existence.

4) A robot may take a human being’s job but it may not leave that person jobless.

Saturday at Roanoke-Chowan Community College (RCCC) he could have added a fifth one: Work together with your robot and have fun. 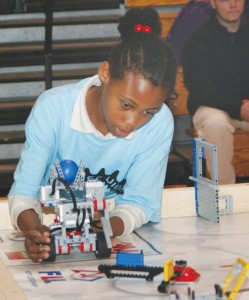 A student from West Bertie Elementary competes in the First LEGO League (FLL) Robotics competition at Roanoke-Chowan Community College. The competition pitted eight elementary and middle school STEM students in Hertford, Bertie, and Warren against each other. Staff Photo by Gene Motley

Not since the old days of the school Science Fair have middle and elementary school students come together for science as they did for the RRVEC (Roanoke River Valley Education Consortium) Ultineers competition.  However, this time, instead of volcanoes made from baking soda and displaying the effects of black-light on bean sprouts, these youngsters were out to show that not only could STEM (Science, Technology, Engineering and Math) be fun, but that through teamwork they could also be used to solve complicated real world problems using a robot.

The student groups hailed from Bertie, Hertford, and Warren counties.  On hand for the inaugural event were the three school superintendents that helped in making the day a reality: Drs. Ray Spain and Michael Perry of Warren and Hertford counties, respectively; and Elaine White of Bertie.

A pair of partners in MUST-Innov8, a Winston-Salem-based consulting firm, Sam McCormick and Joe Kronner, worked with a robotics project for high school STEM students a year ago. This year, thanks to the efforts of the superintendents to initiate the RRVEC, it has moved to the lower grades.

Through the partnership and FIRST LEGO League, the teams of students built robots out of LEGO bricks and programmed them to complete tasks in an obstacle course-type format.  All of the work by the teams was undertaken after school hours with teachers, coaches, and mentors from the business community working together with the kids.

Back in September, Dr. Michael Elam, president of Roanoke-Chowan Community College, stepped in to offer the services of his institution and its personnel.  Sponsors Perdue Farms, Roanoke Electric Cooperative, Harris Equipment, Halifax Electric Membership, and Duke Energy also came on board.

Saturday it was time for the real competition.

During the morning judging phase, each team had to define their project, present their robot design, and explain the core values learned through this experience.  Following the morning session, the afternoon robot run competition began. This consisted of teams programming their Lego robots to maneuver through a series of challenges on an obstacle course-like tabletop format, often traveling a considerable distance from task to task.

The Ahoskie Elementary “Lego Einsteins” won the first phase of the competition with a score of 95.   After some adjustments, which included re-programming robots, to correct their programs if the robot was not performing a task correctly, a second run was held.

This next run featured a strong effort from the Bertie Middle “Roboneers” who edged out Ahoskie Elementary’s “The Intergalactic Geniuses”, 115-100, which were the highest scores posted for the day and gave the overall lead to Bertie Middle.

Despite stiff competition from “The Skittle Gang” of Warren County Middle – which posted 115 in the third and final run – the BMS ‘Roboneers’ held on and won the robot competition by five points, 165 to 160.

“We all work together and we learn together, and we share with each other, and that’s what organization is about” Spain said. “I appreciate all the work you’ve done and I particularly want to salute our coaches and the parents for taking the time out of their lives because if they didn’t like this as much as they did, then they wouldn’t be volunteering after school.  So when this is over, I want you to go over personally and thank them.”

Spain said as much as this first tournament was inspirational, there was more ahead in 2016.

“This is the first competition we’ve had, but it won’t be the last,” Spain affirmed. “What we’re going to do is build on this and moving forward there’s going to be competition in the fall, not just on the county level, but on the state level.”

“It’s been a lot of hard work, but the journey’s really just begun,” said Kronner. “Every student on every team was a winner as a result of their participation in a great new team sport; and in this sport everyone can go pro.”