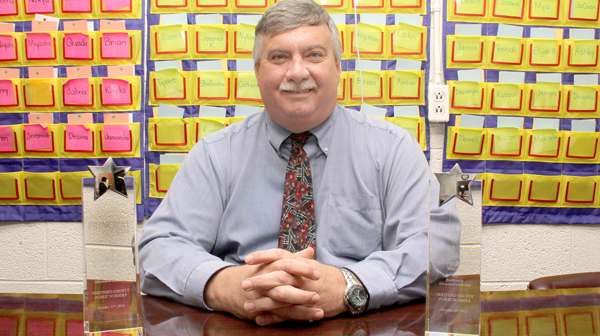 Stan Warren poses with his two Principal of the Year awards for 2014 and 2015. The Murfreesboro native serves as Principal at Ahoskie Elementary School. Staff Photo by Cal Bryant

AHOSKIE – The best part about Stan Warren’s work day is when he witnesses a child learn something new, that special moment when he sees the proverbial “light bulb” pop on inside a student’s head.

It’s at that precise moment when Warren realizes all the work put in over the years as an educator is worth his time and effort.

Recently, officials with Hertford County Public Schools honored Warren’s worth ethic by naming him as the 2015 Principal of the Year. It marked the second consecutive year that Warren, principal at Ahoskie Elementary School since 2008, has been recognized by his peers with such an award.

“Once is an honor; twice is a blessing,” said Warren as he cradled the two trophies in his broad hands. “But you know what, the most important thing in my life isn’t the recognition for what I do for a living, but rather what I’m able to do for the young people of this county, and I’m not alone in that as I’m blessed to have a great staff here at AES as well as parents that support our mission to educate their children. We feel that their children are our children.”

At Ahoskie Elementary, Warren oversees a staff of 63 and a student population numbering 541 students (grades 4-6).

“We’re doing a lot of good things here,” Warren said. “Between what they do at home and then here at school, we feel we are helping to develop a well-rounded child.”

“Mr. Warren has a vision for the students who go through Ahoskie Elementary School; each year he gains mileage toward this vision through strategic planning with his administration, faculty and staff.  He has worked hard to create the culture of ‘WE’ among faculty and staff in which all employees take ownership in paving the way for student success,” stated Dr. Valerie O’Kelley, HCPS Assistant Superintendent.

Warren, a Murfreesboro native, is a product of Hertford County Public Schools. He graduated from Murfreesboro High School in 1983, then first attended Atlantic Christian College (now Barton College) in Wilson before transferring and graduating from East Carolina University in 1989 with a degree in Health and Physical Education. He spent the first part of his educational career as a classroom teacher and coach (football, basketball and baseball) in Pitt County Public Schools – Ayden Middle School and Farmville Middle School.

He came back to Hertford County as a science teacher and tennis coach at the high school before leaving for a four-year stint as a science and physical education instructor and coach (soccer, basketball and baseball) at Ridgecroft School.

Warren’s climb up the educational ladder began when he returned to Hertford County Public Schools as Director of Auxiliary Services and K-3 Curriculum and Instruction Director. That was supported by continuing education with a Masters in Educational Leadership from Regent University and an Educational Specialist degree (a six-year course of study) from Liberty University.

“I could never have accomplished the goals I’ve set for myself over the years without the love and support of my family,” Warren said.

“The Digital program really helped as I have seen our students become savvier in this digital age,” Warren noted. “Everything is going digital – textbooks and what use to be chalkboards are now high-tech smart boards. You either get onboard with it or get left behind. I really like it because the students like it; it makes education a whole lot more fun for them. That’s a win-win situation.”

On the other side of the coin, Warren said the toughest part about his job is what seems to be a constant change in curriculum.

“When Common Core came around we had just really turned the page and were starting to show great strides in educational growth across our district,” he admitted. “We had schools grading out at 70-to-80 percent and then, all of a sudden, the rules change and we took a 40-point drop, as did other schools across the state two years ago. We gained nine of those points back last year, but we’re steadily having to make those steps back up. Common Core has been difficult for the students to learn as well as the teachers, but, with time, we’ll do this too; we’ll get back to where we were and even better.”

For all the bad publicity over Common Core, Warren sees it as a step in the right direction, even though he admits it needs to be refined in certain areas.

“It gets away from teaching at the surface level; Common Core takes it deeper; it makes you think, makes you reason how to solve a multi-step problem,” he said. “It transforms our students into critical thinkers.”

While Ahoskie Elementary recovers from North Carolina’s latest “A-F” rankings (AES was given an ‘F’ along with 143 other schools statewide), Warren promises that those numbers will improve.

“We’ve been there before,” Warren continued. “When I first got here we were testing in the 40 percent range. Over time we improved that to more than 70 percent, and, with time, we will get that way again. We will make this work.”

It’s that attitude from which champions are born….and those who have tasted success will tell you that leadership starts at the top. With a two-time, repeat winner of the Principal of the Year award at the helm, there’s no need to doubt Warren’s words that Ahoskie Elementary will bounce back.