Police Chief Troy Fitzhugh told the Roanoke-Chowan News-Herald that his investigators are studying surveillance equipment in an effort to collaborate that video evidence with the information supplied by the store clerk. 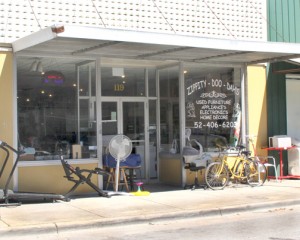 Zippity-Doo-Da’s, a used furniture and appliance store located at 119 East Main Street in Ahoskie, was the scene of an alleged armed robbery Wednesday morning. Staff Photo by Cal Bryant

The robbery was alleged to have occurred at Zippity-Doo-Dah’s, a used furniture, appliance and electronics store located at 119 East Main Street.

Fitzhugh said the call came into his office at 11:35 a.m. The first Ahoskie Police unit was on the scene two minutes later.

“What is alleged at this point is that a single suspect, a black male wearing all black clothing and a gray hoodie, came into the business and demanded money,” Fitzhugh said. “The suspect’s face was covered by a mask and he allegedly displayed a handgun in the waistband of his pants.”

The Police Chief added that the suspect left the store after stealing an undisclosed amount of money.

“There was only store clerk working at the time of the robbery and that individual was not harmed,” Fitzhugh stated.

Anyone with information is asked to contact the Ahoskie Police Department at 252-332-5011.