At the start of Hertford County Superior Court proceedings on Monday morning, Kendrick Kendale Jones of Aulander entered a guilty plea and accepted a second degree murder charge in the 2010 slaying of a former Hertford County High School football standout. 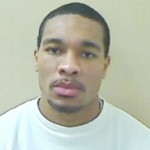 In admitting guilt for murdering then 19-year-old Ivan Jerome Coulton of Ahoskie, Jones, now age 30, was sentenced to 196-245 months for the second degree murder charge and 8-10 months for possession of a firearm with an altered serial number. Those active prison sentences, handed down by Superior Court Judge Quentin T. Sumner of Nash County, will run consecutively in the North Carolina Department of Adult Correction.  Jones received a total active sentence of 204-255 months (17-23 years).

“I am glad this part of the process is over for the family of Ivan Colton,” said local District Attorney Valerie Asbell whose office handled the state’s prosecution. “We will continue to pray for Mr. Colton’s family during this process.

“I want to thank Assistant District Attorney Charles Kinsey for his hard work in preparing this case for trial,” Asbell added. “I also want to commend the entire Ahoskie Police Department for their quick response and expertise in handling a delicate and complicated situation.  I want to especially thank Detective Steven White who was the lead investigator in this case. Detective White spent countless hours investigating this case and preparing the case for the trial.”

Jones stood accused of murdering Coulton sometimes after midnight on May 15, 2010. Jones was arrested less than one week later and charged with five felonies – first degree murder, assault with a deadly weapon with intent to kill, inciting a riot, and possess, sell, buy, alter the serial number of a weapon. He was also charged with go armed to the terror of people, a misdemeanor.

At the time of his death, Coulton was on an athletic scholarship at North Carolina A&T State University in Greensboro. He died after being airlifted to Vidant Medical Center in Greenville.

The shooting, which occurred in a lot off Catherine Street in downtown Ahoskie, took place following a disturbance at BJ’s, a nightclub located in the 200 block of East Main Street. Ahoskie Police officers were dispatched to the scene, where Chief Troy Fitzhugh said at that time they found a large and unruly crowd, and shut the club down at 12:50 a.m. due to safety concerns.

Fitzhugh said that upon shutting the club down, officers then responded to a large crowd on First and Maple streets. “Next, my officers responded to a fight and gun shots being fired on Catherine Street,” Fitzhugh reported in a story published by this newspaper on May 21, 2010. “An officer with the Ahoskie PD on foot ran to the gun shot call. There was a large crowd. Once the officer located the victim, the officer called for police and medical assistance.”

According to court records, Jones was facing a non-capital first degree murder charge prior to entering a plea. He was represented by attorneys Jack Warmack and Tonza Ruffin.

Pre-trial motions in this case were heard during the February term of Superior Court and jury selection was set to begin Monday.