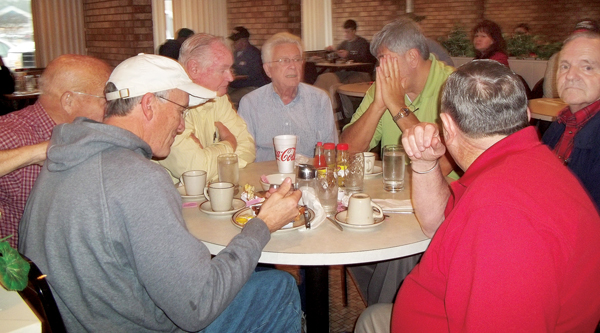 Local, state and world problems have been discussed and solved over the years at O’Connor’s Restaurant where locals would gather for breakfast, lunch and loads of conversation. Contributed Photo

AHOSKIE – It wasn’t just a restaurant, but rather an establishment…much like the man who owned and operated it for over 30 years.

Visiting O’Connor’s Restaurant was like rising from your bed, walking down the hall and entering your dining room. It had that feeling of home and was such for local citizens spanning several generations. 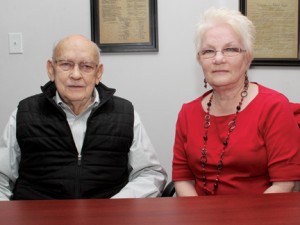 Howard Brown owned and operated O’Connor’s Restaurant from April 1, 1982 until Dec. 31, 2014. One of his longtime employees was Mary Ayers (right). Staff Photo by Cal Bryant

Howard Brown sold that popular local eatery late last year. It now operates under new ownership as Carolina Chicken and Barbecue. But the memories remain for those that visited or worked for former owner Howard Brown.

Mary Ayers of Powellsville started working for Brown when he opened the doors in 1982. She left briefly for waitress jobs at Walter’s Grill in Murfreesboro and Tar Heel Barbecue in Gates County, but eventually returned to her roots.

“I was actually working for Mack McCullough, who operated the old Dixie Restaurant (in the same location) before Mr. Brown took it over,” said Ayers. “Mr. Brown started with a small chicken and barbecue buffet and then enlarged that to include other meats and vegetables.”

Ayers said her children, and now grandchildren, grew-up within the environment of O’Connor’s Restaurant.

“They worked there when they were younger….so young that they needed a worker’s permit,” she laughed.

She noted the popularity of O’Connor’s through the men of the local community that came in every morning for, “coffee and conversation.”

“They were like family,” Ayers recalled. “We had some good times….joking, laughing and carrying on. The laughter was all over the restaurant, but then it was sad when we learned that one of the group had passed away. Sometimes you’d be talking to them one day and the next day they were gone. It was like you lost part of yourself.”

Like any business, there are good days and bad.

“We would argue and fuss sometimes, but at the end of the day it was always about serving the folks who came through our door,” Ayers said. “The folks who worked for Mr. Brown were like one big family.”

On the last day of business (Dec. 31), Ayers passed around a couple of the restaurant’s menus for customers to sign.

“I thought that was a neat idea,” Ayers remarked. “I gave them to Mr. Brown for keepsakes.”

When asked what kept customers coming back to O’Connor’s, the food or the service, Ayers said both were major drawing cards, but yet she felt it was the customers enjoying themselves that played a vital role in keeping the doors open for well over 30 years.

“People came to eat, but they also came to enjoy each other’s company,” she said. “People felt at ease; they felt comfortable because they didn’t feel rushed. Everybody knew everybody.”

One lasting impression that Brown left on Ayers was his steadfast commitment to be at work.

“He had to be very, very sick to miss a day of work,” she said. “He was here at 4 a.m. every morning. Come ice, sleet or snow, he was always here. I can’t remember but one week that he missed because of having the flu.”

Ayers recalled the restaurant was at one time opened for dinner.

“We were working around the clock, from 5 in the morning until 10 at night; I guess it was a lack of help for the dinner shift that led Mr. Brown to stop serving dinner,” she said. “But we had one heck of a business for breakfast and lunch, seven days a week.”

If she could pin one thing on why Brown opted to sell the business, Ayers said she felt it was due to age.

“He’s the hardest working man I know, but he’s 87 and I guess he felt like it was time to retire,” she stressed. “But even though he no longer owns the restaurant, he’s still here every morning having breakfast and going around talking to folks. That’s just something he still loves to do.”

After owning and operating Brown Oil Company for 18 years, Howard Brown opted for a career change, opening the doors to O’Connor’s Restaurant on April 1, 1982.

The name of the restaurant came partially from Brown’s middle name – Connor. The other part is a funny story.

“I had two salesmen in one day and we were trying to come up with a name for the restaurant,” Brown recalled. “One of the salesmen asked what the first thing I thought about when deciding to open this restaurant. I remembered saying to myself, oh hell, Connor, what have you gotten yourself into. O’Connor’s came from that.”

Brown said the transition from selling oil and gas to selling food was an easy one.

“I owned the building and Mack ran the Dixie; when he decided to get out of it, I decided to get in it,” he said. “I was a cook when I was in the Marines, so that part came natural to me. Plus I had previously operated a restaurant for a man for about six months.”

“I hired a cook, but if he was out I could step right in and do that job,” Brown said. “And I hired folks with good skills on how to serve customers.”

Like Ayers, Brown said he believes the bond of friendship forged between the wait staff and the customers was the restaurant’s main drawing card.

“People just loved to come to eat and talk,” he said. “They would go table to table to visit with each other. They were all part of a big family. They felt at home. It was friendship and fellowship. I’d go table to table and join right in with the conversation. I believe I got treated with repeat customers because of the way I treated them.”

Brown would even bend the rules when it came to the menu.

“If they wanted something different, or something listed on the menu fixed a different way, we tried our best to give them what they wanted,” he said.

Brown was also community spirited. Since O’Connor’s did not open for dinner (from the mid 90’s forward), twice a year he would turn the restaurant over to the Ahoskie Chamber of Commerce for their barbecue and fried chicken fundraiser. He later added Hertford County Special Olympics to that cause. In all cases, Brown and his staff would prepare the food at their cost, and members of the two organizations would serve as the waitresses and cashier.

“That was just my way of giving something back to the same community that supported my business all those years,” he smiled.

In hindsight, Brown said he would not change a thing when it came to running a restaurant.

“It was a good life; I guess I liked it because I like being around people. Now folks say I’m retired, but I’m really not. I’ll find something to do. If I just went home and sat around, I wouldn’t be happy,” he concluded.

Howard Brown is the ultimate “happy guy” – to include making others feel the same way through the life and times of O’Connor’s Restaurant.