Rollin’ out the score!

GATESVILLE – A near 40-point effort from junior Kaila Ballard helped propel Gates County High to a 60-53 win over Lakewood in the 1A East girl’s basketball sectional championship.

The win sends the Lady Red Barons (26-1) to a 7 p.m. date tonight (Thursday) at Fayetteville’s Crown Arena against Goldsboro Rosewood in the first game of the Eastern Regionals.   Roxboro Community against Williamston Riverside will follow at 8:30 p.m.  The Eastern Championship game is set for 2 p.m. on Saturday. 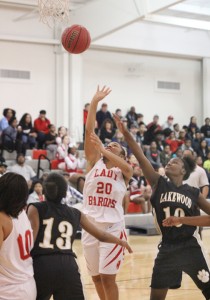 Gates County’s Javien Knight slices between two Lakewood defenders as she puts up a shot in Tuesday night’s sectional finals, a game won by Knight and the Lady Red Barons, 60-53. Staff Photo by Cal Bryant

As for Tuesday’s sectional final, Ballard got the first points of the game for her team and the last, ending her home-court run on the year with 39 points total, the only player in Red-and-White in double-figures.

Kiara Rich led the Lady Leopards with 13 while teammate Justina Henry had a dozen and Briana Evans chipped in 11.

“We came ready to play and the girls played well,” said Gates coach Keli Boone. “We did a good job on defense because Lakewood could shoot; and we had to make our free throws there at the end.”

Ballard took a pass off the opening tip and drove the lane for a lay-up while being fouled and drained the free throw for a 3-0 Gates lead.  It was 5-1, Gates, when Lakewood started a comeback.  After tying it at 6-6 on a three-pointer, the Leopards went up by a trey, 9-6, on another three-point basket.  The lead eventually grew to five at 13-8 before Ballard scored Gates’ last five points of the first quarter.  The ‘Barons trailed by a point, 14-13, at the end of the period.

It was still a one-point game, 16-15, early in the second quarter when Javien Knight hit a big three-point basket allowing Gates to re-take the lead.   But Lakewood tied the game a second time, and then a third, at 20-20, before Knight came through with another long-range bomb making it 23-20.  Ballard then made four-straight free throws after being fouled inside the paint and Victorya Randolph capped the quarter with her only bucket of the frame.  The two teams headed off to the locker-room at the mid-break with the Red Barons on top, 29-22.

The Leopards had no answer for Ballard and she ruled the paint at will.  Lakewood managed to sandwich a pair of three-point baskets in between an eight-point run by Gates that had the ‘Barons in front by nine, 37-28.   Six more Gates points, two by Alaysia White, put the home-team ahead by 15, 43-28.   Rich and Evans trimmed five points off that deficit, and it was a ten-point Gates lead at the end of the third quarter, 43-33.

Rich and Henry scored first for Lakewood out of the third quarter break to begin the fourth trailing by five, 43-38 at the 7:19 mark.  But back came Ballard, muscling her way inside once more for two buckets in the paint and a nine-point bulge again.

The team matched shots until Ballard and Amber Jordan scored back-to-back to make it 54-43.   A Henry three-pointer was good and the Leopards had eclipsed the 10-point mark again, 54-46.  White made both ends of a one-and-one to put the ‘Baron lead back at ten, 56-46, but another Leopard three-pointer had the lead down to seven again.   Gates then committed the sin of fouling on a three-point shot and after all three foul shots were drained, it was a seven-point game once more.    But Gates came through at the foul line, making five-of-six, four by Ballard, to make it a seven-point game, 58-51, with 20 seconds left.  A desperation heave cut it to five for the last time before Ballard’s last two foul shots sealed the, what else – seven-point – win.

“This team is excited about going to play in the Regionals,” a jubilant Boone said afterward. “I’m just so proud of them.”