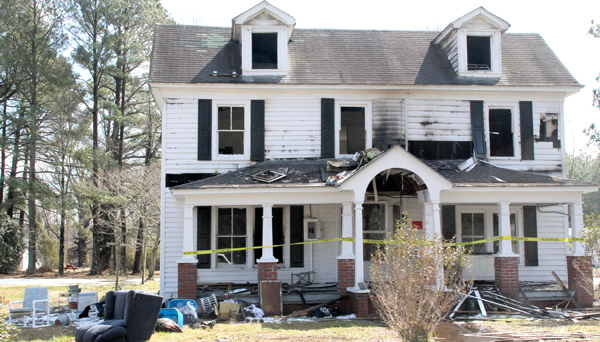 AHOSKIE – A wet, cold and gloomy Sunday afternoon took a turn for the worse for a local family.

A home at 1310 North Martin Luther King Jr. Drive occupied by Sylvia Barnes, her husband and a family member was extensively damaged by fire.

Fortunately, no one was at home when the fire broke out shortly before 1 p.m. Ahoskie Fire Chief Ken Dilday reported that all occupants of the home were at church at that time.

Dilday said the two-story framed home was showing smoke and flames when the first of four fire units arrived at the scene.

“The fire began on the bottom floor and got into the walls, traveling up to the two bedrooms on the second floor as well as the front porch,” Dilday said. “We had to cut holes in the walls to gain access to the fire.”

Dilday said the home is unlivable due to the extensive damage. He added that an electrical malfunction triggered the fire.

“We put the family in touch with the American Red Cross who can help with short-term housing assistance,” Dilday stated.

“The ladder truck really helped as we were able to use it to gain easier access to the second floor,” Dilday noted. “The guys did a heck of a job with this fire. It was a tough one to fight because of it getting inside the walls and also due to the cold, rainy weather. The key thing was that no one was injured.”

Dilday praised the assistance of Hertford County EMS who had a unit on the scene for the duration of the event. He also thanked the Ahoskie Police Department for handling the traffic control.

The home is owned by Jerome James. Barnes is a renter.