AHOSKIE – At the end of the summer in 2008, 53 Hertford County ninth-graders christened the new Hertford County  Early College School located on the Roanoke-Chowan Community College campus.

Among that group of freshmen was a quiet and reserved Fanny Sanchez. However, she had no shortage of dreams and motivation, and one clear and focused goal: “to finish.”

She did “finish” and then completed here undergraduate studies en route to becoming the first Hertford County Early High School graduate to complete a baccalaureate degree. 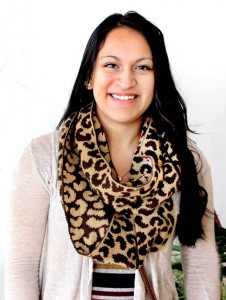 The Early College High School is an innovative five-year program that aims to graduate students with a high school diploma and two years of transferable college credit or a college degree at no cost to students or their families. The NC Department of Public Instruction (NCDPI), the NC Community College System, and the University of North Carolina partnered to develop the early high school initiative. Launched in 2004, the purpose was to reduce the high school dropout rate and help students to gain the advanced skills demanded by the 21st century workplace.

“It was great to hear how you could finish and be so ahead, and that is what really pushed me,” explained Sanchez.

Her drive was palpable, and she completed the five-year program with a perfect 4.0 grade point average (GPA) in only four years. She was able to complete the program early because she met college-level proficiency in reading, English, and math, which allowed her to immediately begin taking general education courses for college credit.

Students who score below college-level proficiency are placed accordingly in developmental courses, which prepare them for the rigor of college-level coursework.

Sanchez explained that the Early College High School experience was a critical step for reaching her long-term goals. The encouragement and example set by her parents helped to solidify her resolve to achieve a college education.

“My parents encourage me to become better—someone with a career so I won’t have to struggle like they did,” she said. “It’s hard for me to see my parents work so hard just for me to get an education. And I want to be a role model for my younger brother. We are Hispanics. We come from low income and my parents work very hard. We struggle a lot.”

Sanchez mentioned that Hertford County ECHS students go on field trips to universities around the state. She and many of the other students had never been to a university campus before.

Sanchez also credits her teachers and guidance counselor, Karen Hinton, for providing encouragement and support to further her education and pursue her goal of becoming a medical doctor.

Hinton assisted Sanchez to apply for the Chancellor’s scholarship at Elizabeth City State University (ECSU), which she won. Sanchez entered ECSU as a junior in 2012.

“It was a great experience; I am not very social and my main focus has been school. My main goal was to finish in three years,” she noted.

Currently, Sanchez is laser focused on studying for the Medical College Admission Test (MCAT) and seeking scholarships. High MCAT scores will be needed for her application to the Brody School of Medicine at East Carolina University.

“Ever since I was little, I knew that I wanted to go to college and be a doctor,” she explained. “I have a cousin in Mexico who is a doctor and I always admired her.” Sanchez said that she plans to become a pediatrician. She would like to practice in Ahoskie or “somewhere in Hertford County.”

When asked why she didn’t want to move to another area, she said, “Because I live here and I want to help my community out, and give back.”

After she is accepted into medical school, Sanchez expects that it will take her four years to complete school and then she will spend three years in residency. Hertford County will then have a brilliant new pediatrician.