Arrest made in newspaper thefts

LEWISTON-WOODVILLE – A Pitt County woman has been arrested and charged with the theft of multiple copies of the Roanoke-Chowan News-Herald from two coin-operated newspaper boxes at a pair of Bertie County locations.

Sharon Lavon Kuykendall, 44, of 10 Vance Street in Greenville was arrested and charged with two counts of misdemeanor larceny, a Class-1 offense. 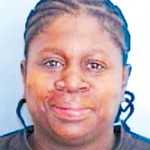 According to Officer Harris Williams of the Lewiston-Woodville Police Department, at 10:40 a.m. on the morning of Saturday, Jan. 24, a dark-colored mini-van driven by a black female pulled into the parking lot of the Duck-Thru convenience store in Lewiston.  The woman reportedly exited the vehicle and approached a newspaper rack outside the store, where she put money in the box and extracted all of the remaining copies of the Saturday edition.

Though the woman’s actions were seen by several witnesses, she continued on and placed the stolen newspapers into the vehicle and left the convenience store.  One of the witnesses had copied the vehicle’s license tag number and alerted the Sheriff’s Office and Lewiston-Woodville P.D.

In the meantime, another witness reported that this same vehicle had earlier on Saturday pulled into the Family Foods grocery store parking lot in Lewiston and a woman fitting the same description committed a similar theft at the News-Herald rack there.

The woman is said by other witnesses to have then returned to Family Foods a second time and tried to retrieve several more copies of the newspaper from the same box, but this time was stopped by a store employee.  Upon being confronted, the woman left the second batch of newspapers atop the paper box.

After the Duck-Thru theft was reported to authorities, Williams said his office reviewed surveillance videotape the next day. Witnesses told the police the mini-van had Virginia license plates, but a check by Williams of Virginia motor vehicles came up empty. Williams ran the same license number for North Carolina, however, and got a hit on a grey Toyota mini-van.

Saturday, Feb. 7, while on patrol, Williams noticed a vehicle fitting the Toyota’s description parked at the same Duck-Thru. The female driver was stopped and taken back to LWPD for questioning where she later confessed to the thefts.

Williams told the News-Herald that Kuykendall admitted putting 50 cents into the paper box at Duck-Thru and taking 25 copies of the newspaper on Jan. 24.  She then did the same thing at Family Foods, retrieving 20 copies. Kuykendall returned to Family Foods a short time later to claim more copies from the machine, but was stopped.

Kuykendall said the reason for the thefts was to retrieve the newspapers’ coupons.

Kuykendall was placed under $500 secured bond and bonded out the day of her arrest from the Bertie County Sheriff’s Office.  She is scheduled to make her first appearance Feb. 18 in Bertie County District Court to answer the charges.

Last year, Roanoke-Chowan Publications, publishers of the Roanoke-Chowan News-Herald, experienced a significant loss of revenue due to newspaper pilferage. The majority of that theft occurs with Saturday’s edition.

“Single copy sales remain as one of our main revenue sources, so one can imagine the impact we feel when the entire rack is empty and there is only 50 cents in the coin collection box,” said Cal Bryant, RCP Editor. “Multiply that by the number of newspaper racks we have in our four-county coverage area and you can easily see the revenue loss we are experiencing.

“We understand the popularity of our Saturday product due to the cost-saving coupons typically inserted into that particular edition,” Bryant continued. “But when a person or persons decide to steal all copies from the rack, it leaves the honest, law-abiding readers of our newspaper, who also perhaps benefit from the coupons, without an opportunity to make a purchase.”

Bryant suggested to those wishing to purchase multiple copies of any edition of the News-Herald to consider visiting one of the establishments with inside, over-the-counter sales or to drop by the RCP main office in Ahoskie to make your purchase.

For those making a habit of stealing newspapers from the RCP single copy racks, Bryant issued a fair warning.

“We have met with law enforcement agencies within our coverage area and they are aware of the theft we are experiencing,” he stated. “There are a lot of eyes out there looking for this type of criminal activity and, if arrested and judged guilty, we will allow the prosecution to follow the letter of the law to the fullest extent.”

Bryant also thanked the witnesses who assisted in the eventual arrest of Kuykendall as well as thanking the Lewiston-Woodville Police and Bertie County Sheriff’s Office for their thorough investigation.