An origami bear made of steel, the first of several art structures that reflect life in the greater Ahoskie region, will be placed at Ahoskie Creek Park Recreation Complex (ACRC) after the Ahoskie Town Council voted unanimously on Tuesday to approve that location. 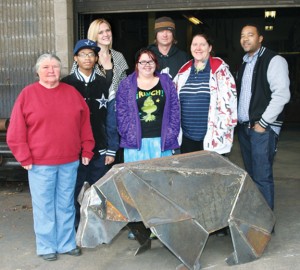 At its regularly monthly meeting, the Council approved the placement of the 12’ x 24’ steel sculpture at the Park behind Ball field #1 next to the starting tee-box for one of the Park’s disc golf holes.

“There’s a great big section in there that doesn’t have anything,” said Town Manager Tony Hammond. “It looks like to us that this would be the best place to put this.”

Like the caves of his namesake, the Eastern Black Bear sculpture has had several options for where the artwork would reside in the town.  Several of the sites considered were located within the Park complex.  They included:

In front of the old National Guard Armory Building (currently the Ahoskie Parks & Recreation Department Community Center) where a small concrete slab that would serve as a base for the sculpture was already in place.

The beginning of the Walking Trail at ACRC at the end of Camlin Street.

The south end of Lakeview along the creek beside the Walking Trail.

The empty lot across from Wells Fargo Bank on Main Street where there are also concrete slabs in place.

Messer first approached Council with the idea in Nov. 2014 when he presented a cardboard mock-up of the artwork which the college undertook in cooperation with Nucor Steel and Sheuck Steel.

Messer informed Council at that time that his art students at RCCC came up with the idea, that the steel was donated from Sheuck Steel who would fabricate (cut) the steel and once the artwork was completed it would be installed wherever it could best be displayed.

Messer wanted the sculpture, which rests on a concrete pad, to be displayed for students and the public to see and appreciate; and where younger students would have a chance to recreate it, fold it, and make it in their own classrooms out of paper.

When completed the sculpture will be coated in order to resist rust and the elements, and occasionally need a touch-up.  RCCC students would come out once a year and clean up the sculpture and maintain the landscaping (grass-cutting) around it during the summer.  Messer also informed Council this artwork is another way to attract local people and visitors to the area.

The construction for the large sculpture will be done at Sheuck Steel according to plant manager Rick Watford.

“We want to do all that before Jan. 1,” Messer said at the time. “Then they can start spring semester with this as part of our welding program.”

The original date for the unveiling was slated for the end of March during the season’s first warm weekend.

Two months later, at the Council’s January meeting, debate over the location produced some lively discussion as members were slated at that time to vote on a site.

Councilwoman Linda Blackburn commented that the town didn’t own the property in front of the bank.

“I’d like to help that owner get a business downtown rather than put a bear on its property,” Blackburn said.

Chamber of Commerce Director Amy Braswell said the schools wanted the sculpture to be thought of as more than just a school mascot.

After more discussion, a motion was made by Councilman Rev. C. David Stackhouse and seconded by Councilwoman Elaine Myers to table the site location project vote until the February meeting.

Tuesday, Hammond informed Council as to what one of the projects organizers, Marvin Jones of the Discovery Group, had been actually looking to do with the sculpture.  Jones said he supported Messer’s preference of the ACRC site location.

“After we went out and looked at all the sites, it’s our recommendation that this bear be placed right behind Field #1, which is a cross of Lakeview and Camlin, right where tee-box #2 is for disc golf, up from the Dog Park,” Hammond said.

Stackhouse once more made a motion to approve the ACRC site and before Myers seconded the motion, she left room for other sites for more sculptures.

“In this information we also understand there will be other sculptures that will be done,” Myers said, “so there will be other places in town where we can see different things happening. There was some interest in not locating it there because we wanted to recognize other activities of the town, but since there will be more locations I will second it.”

The motion then passed Council by a unanimous vote.