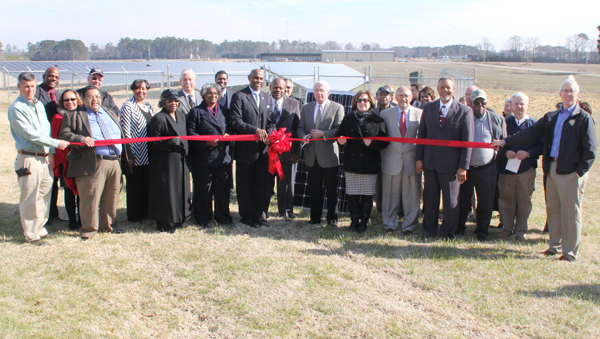 Roanoke Electric Cooperative officials are joined by local and regional dignitaries as they cut the ceremonial ribbon to formally open the Community Solar Farm located adjacent to the REC headquarters. Staff Photo by Cal Bryant

AHOSKIE – It’s a great way to “farm” without getting your hands dirty.

And, as promised by Roanoke Electric Cooperative (REC) officials, it’s a great way to jump onboard a worldwide renewable energy effort while saving some hard-earned money in the long run.

On Thursday, REC hosted “Sustainability Day” which included a ribbon cutting and information on the electric co-op’s new Community Solar Farm, and a reminder about another REC cost-saving initiative – Upgrade to $ave.

“We have the responsibility to act in a way to not harm our environment that would affect our children and our grandchildren,” said Curtis Wynn, REC President/CEO in explaining the definition of sustainability. 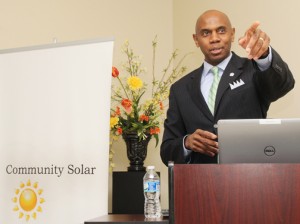 Wynn showed a graph detailing the growth of renewable energies by electric co-ops nationally. He said that growth has skyrocketed over the past three to four years.

“What we’re doing here at Roanoke Electric with our green energy initiatives is just part of a bigger movement across our nation,” Wynn stressed. “But what we’re doing here just didn’t start recently; sustainability has been a part of our operation for the past several years.”

While the local area is buzzing with excitement over REC’s Community Solar project, Wynn said that initiative works hand-in-hand with the company’s Upgrade to $ave program, which started last year.

“We do not want to provide a renewable source of energy that’s going to be wasted; that’s why the Upgrade to $ave program needs to be a part of the bigger conversation,” he stressed.

REC borrowed $6 million from Rural Utilities Services, a branch of the US Department of Agriculture, as the seed money to open Upgrade to $ave, a program that finances cost effective energy efficiency improvements for REC members while helping to promote local qualified contractors to gain work.

“We’re seeing some of our members who are already struggling with paying for their food, medicine and other things that they need, and then have enormous electric bills, especially during the cold winter months, basically because the electricity is being wasted,” Wynn noted.

Through Upgrade to $ave, REC will make investments in energy efficiency that allow its members to save money on their bills without making any upfront payments or incurring new debt obligation.  In turn, participating members agree to pay a voluntary tariff on their monthly bill (for up to 10 years if needed) that shares the energy efficiency savings with the cooperative at a level that assures immediate savings for the participants and full cost recovery on the loan for the cooperative.

“What will typically happen once the energy upgrades are made at the homes of our members, they will see immediate savings on their electric bill that exceed what they are paying back for the upgrades,” Wynn noted. “The best thing is that those savings will continue long after they pay-off the money invested into the energy upgrades.”

“We want to help 200 members a year for the next five years with this program,” Wynn said.

As far as the Community Solar project is concerned, Wynn harked back to the days when electric co-ops were coming to life nationwide.

“There was a need, for us it was 75 years ago, to have a network to supply electricity to rural areas….that was a big thing back then,” he stated. “Collectively, people came together and formed an electric cooperative in a way that cost everyone less. That’s what we doing with this Community Solar project. We saw a need and we, as members, are coming together to fulfill that need.”

“We’re using that plant as a conduit to get to our customers,” Wynn remarked. “We not all too familiar with community solar, so by going out and finding partners that do know about solar energy, we don’t have to deal with all the headaches. We didn’t have to put up the capital to make this work, that money came from Federated Insurance Exchange.”

The facility contains 360 solar panels. Each are available for sale to REC members for a one-time fee of $480 until the end of February (after March 1 the price increases to $525). A member can pay for that all upfront or finance (43.75 per month, interest-free, added to their REC bill) for one year.

Each panel is capable of producing 480 kilowatt hours of electricity per year, which will be added to the REC power grid. In return, those investing in the panels will be paid an estimated $32.26 per year for generating that electricity. At that rate, the initial $480 investment will be fully recovered in 13 years.

“These are two significant programs that will make a major impact in our service area,” said Marshall Cherry, REC Chief Operating Officer. “We see extremely high consumption of electricity across our service area; in a lot of cases that’s due to homes that are energy inefficient.”

Cherry said the data shows that a typical electric co-op basically has one out of 10 residences that is pre-manufactured housing. REC’s data is triple that amount (3-of-10 homes).

“Our (electric) rates haven’t changed, what has changed is an increase of power consumption. That’s why we see Upgrade to $ave as a way to lower the electric bills of our members, who in turn have a more energy efficient home that saves them even more money down the road,” Cherry said.

Cherry said there is a need for additional contractors to handle the expected glut of work to make the energy upgrades.

“The Community Solar piece is also an important part of this dialogue,” Cherry added. “And we’re looking even further down the road at ways to make REC and our customers more energy efficient. We may even look at duplicating this solar farm here across our district.”

REC Board member Kenneth Jernigan of Gates County served as the Master of Ceremonies at the Jan. 22 event.

“I’ve bought mine, and I want everyone else to hopefully buy one,” said Jernigan, referencing a panel at the REC Community Solar Farm.

“This is a very special day, made possible through the collaborative efforts of a lot of important people. We’re so happy to the powers that be who have us this opportunity,” said REC Board member Delores Amason of Halifax County.

Also taking part in the program were REC Board member Columbus Jeffers and Billy Yates, REC Vice President of Operations.