‘Deliverers of the Dream’

AHOSKIE – They are the “Deliverers of the Dream”, men who manifest the ideals of the late Dr. Martin Luther King, Jr. and like King, they haven’t just spoken the word: they’ve lived it. 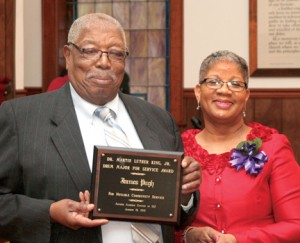 In the photos from top to bottom: James F. Pugh, the Rev. C. David Stackhouse, Bishop Dr. J.C. Watford, and Carl White were the recipients of the MLK Drum Majors for Service awards as presented Sunday by the Ahoskie Alumnae Chapter of Delta Sigma Theta Sorority. Shown in each photo is Vernetta M. Henderson, president of local chapter. Staff Photos by Gene Motley

The quartet, all Roanoke-Chowan area residents, is known for their humanitarian work and community service.  They were honored by the Ahoskie Alumnae Chapter of Delta Sigma Theta Sorority at their annual Martin Luther King Day program held Sunday at Piney Wood Chapel Baptist Church near Ahoskie.

The Ahoskie Deltas have been holding a King tribute program for the past 36 years but 2015 marks the first time the sorority has given the “MLK Drum Majors for Service” awards.

“Over 50 years ago, Dr. King described what he called the ‘Drum Major Instinct’ in a speech at his home Ebenezer Baptist Church in Atlanta,” said awards chairperson Genia Canada. “In the speech Dr. King said ‘Everybody can be great, because everybody can serve’.  He said you don’t have to have a college degree to serve, you only need a heart full of grace, a soul generated by love, and you can be that servant.”

Canada went on to state that the honorees were merely ordinary individuals who perform extraordinary service with reliability and commitment.

“It’s time to recognize those who have demonstrated the ‘Drum Major Instinct’ in the community,” Canada said. “And we say a special thank-you to them for being drum-majors in our community.” 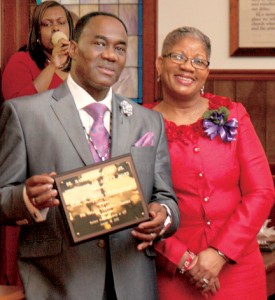 First recognized was Bishop Dr. J.C. Watford, senior pastor of Rountree Temple of Praise in Powellsville as well as owner and general manager of WRCS AM Radio in Ahoskie.

Watford holds degrees from institutions as varied as Chowan University, East Carolina, and New Life Theological Seminary.  In addition to being a preacher and a businessman, the ex-Marine has also taught and is currently a dean at New Life.

“As a leader he is always seeking more of God’s wisdom and anointing,” Canada said. “He never considers himself a scholar, but always a student of God’s Word.”

“I just want to do God’s will, because if I do God’s will then everything else will fall into place,” Watford said.

Carl White was honored for his more than 24 years of civic duty, particularly through Prince Hall Lodge, Parks and Recreation for the town of Ahoskie, and especially as a past president of the Hertford County branch of the NAACP. 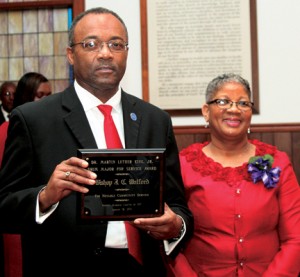 “I’m proud to have been an advocate for the people of the Roanoke-Chowan area,” White said. “I’m grateful for all my achievements and accomplishments and particularly proud to be honored by all of you with this tribute.”

New Ahoskie Baptist Church pastor Rev. C. David Stackhouse drew one of the loudest approvals from those in attendance, as many members of his congregation were present.

“He’s a pulpiteer, contemporary visionary, community activist, educator, and mentor,” Canada said. “He’s an energized pastor who feels called to his mission here in Ahoskie and he is known for his enthusiasm and unwavering devotion to his calling.”

Stackhouse is founder of a program for at-risk youth in the Hertford County schools, an elected councilman for the town of Ahoskie, vice-moderator of the West Roanoke Missionary Baptist Association, and been named Elks “Man of the Year.”

“I grew up in the hot tobacco fields of Fayetteville and Cumberland County,” Stackhouse said of his acceptance. “As the son of a sharecropper one of the best things my parents passed down to me was a fervent belief in God.” 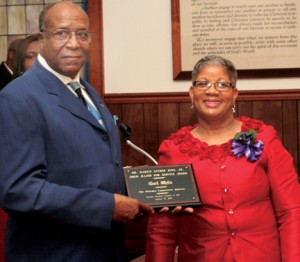 The fourth honoree was James S. Pugh of Lewiston-Woodville.  Pugh, now retired, had a 21-year career as a Placement counselor placing job applicants with various businesses from Newport News Shipbuilding to Perdue Farms.

“He has a heart for helping others to the best of his ability,” said Canada.  “And at the age of 84 he believes in making himself available to all mankind.  He has been known to check in on as many as 25-to-30 people who live alone, sometimes in a single day; and he is known to visit 11 nursing homes a week. His philosophy is that everybody can be somebody. He prides himself on serving others, being dedicated to the cause, and being a blessing.”

Pugh is also a former precinct chair for the Bertie County Democratic Party, an NAACP member, and is currently a Bertie County Soil and Water District Supervisor.

“Whatever your resources, be they money, education, or talent, when you utilize them wisely you will find yourself helping somebody,” Pugh said. “Words can’t express what it means to be recognized for the small things you do in hopes of making an impact in the lives of many.”