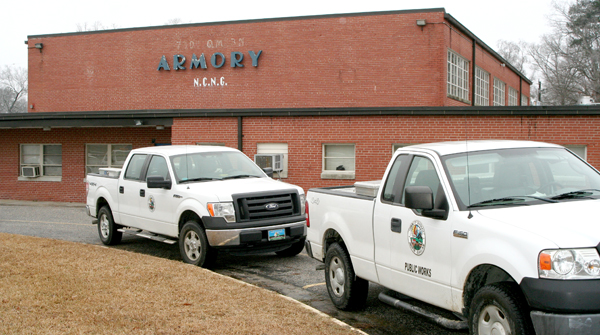 AHOSKIE – When the Ahoskie Rotary Club holds its annual Pancake and Sausage Day in March, it will still be held at 403 Peachtree Street.

That used to be the address of the North Carolina National Guard Armory, part of the 540th Quartermaster Battalion.

It’s the same building, only now it is called the Ahoskie Community Center. 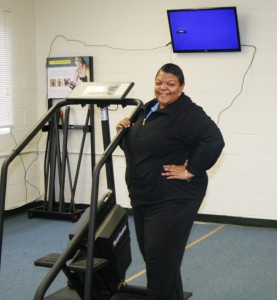 Joan Godwin, Assistant Ahoskie Parks & Rec Director, is shown with one of the exercise machines located within the Community Center. Staff Photo by Gene Motley

The Pancake and Sausage Day will be the first public event to be held at the newly-named facility, though private events have been held there since the town took over occupancy last fall.

Tuesday at the regular meeting of the Ahoskie Town Council, Town Manager Tony Hammond presented a proposed Rental Agreement and Rate Schedule for those desiring to use the 3000 square foot facility.  Hammond said the agreement and schedule was based on other towns similar to Ahoskie who had also acquired Armories and were converting them to multi-purpose use.

“We’re getting to the point now that we’re getting inquiries about utilizing the building, what the rental rates are, and what it can be used for, the hours of operation and things of that nature,” said Hammond.  “I put all that in this document.”

Hammond based the rental rates on the size of the rooms on a four-hour schedule and a requirement that anyone renting the building will have to staff it.

“(This document) is also written that it cannot be rented for commercial gain,” Hammond added. “Someone could not come in and rent that building for a four-hour dance and then sell tickets to that dance as a profit-making venture.  The only individual group that could sell tickets to that thing is a non-profit designated entity.”

Councilman Charles Freeman suggested Council tabling any action on the Rental Agreement and Fee Schedule pending the board’s annual retreat next month when they’d had more time to review it.

Councilwoman Elaine Myers said the extra time would allow Council to compare it to rental rates for other Ahoskie facilities.

As for the Armory’s history: the Town of Ahoskie originally owned the property and in 1954 leased it to the state of North Carolina which in turn used it as an NCNG Armory with offices, motor pool and an indoor assembly parade ground.

The 540th weren’t the only ones who’ve used it; the local Armory has changed “flags” (operating units) before. Prior to becoming a Quartermaster unit in 2002, Ahoskie Armory personnel operated under the flag of the 119th Infantry Regiment, part of the 30th Heavy Separate Brigade. 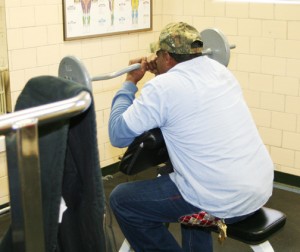 A Town of Ahoskie employee uses a portion of his lunch hour to work out on the free weights in the weight room of the Community Center. Town employees can work out for free. Staff Photo by Gene Motley

However, ever since the Guard vacated the building on a full-time basis back in 2009, the town had been trying to re-acquire the property and was finally able to secure it in 2014.

Currently the main tenant is the town Parks & Recreation Department.

“The town has been maintaining the outside of the facility for years,” said Ahoskie Parks & Rec director Tina Pritchard. “We were already maintaining it.  One Guardsman was here, and he wasn’t always here, and has since moved his offices to Woodland.”

The town had originally planned to build a Community Center at the Ahoskie Creek Recreation Complex, but tried instead to acquire the Armory, which the state was reluctant to turn over.

“I’m not sure exactly what changed, but Tony was working with them the whole time and somehow they decided to give it (back) to us, Council accepted it, and we got the deed,” said Pritchard.

After acquiring the building, Pritchard, assistant Joan Godwin, and several other Parks & Rec staffers undertook the task of painting all the rooms, the floors, portions of the walls, repair the restrooms, and replace lights and ballasts.

“Now we’ve added the mirrors, fixed up the kitchen and bathrooms, and we’re just thrilled to be here,” Pritchard enthused. “And since we’ve moved here we’ve gone from having six members of our Fitness Room classes to having 50.”

Town employees are allowed to come in and use the facility for free.  Fees are $10 per month for town residents and $20 for non-residents.  The aerobics classes – three days a week – are $15 and $25 monthly.

“You can’t beat that,” Pritchard said.  “We have a weight room, aerobics and fitness classes three days a week in the morning and at night; we’re starting after-school pre-school classes, and eventually we’re going to have a nature room.”

Roughly 1200 square feet of office space remains unused at the Center.  The NCNG still uses one office for their purposes, but most of the others are available.

“We’re calling (most of) these as classrooms,” Pritchard noted. “And we’re not putting any tables and chairs in them for now.”

The Parks and Rec staff took about a month to paint, make their additions, and move things from the City Gym just off Main Street.

“And we’re not finished yet,” she adds with a wide grin.