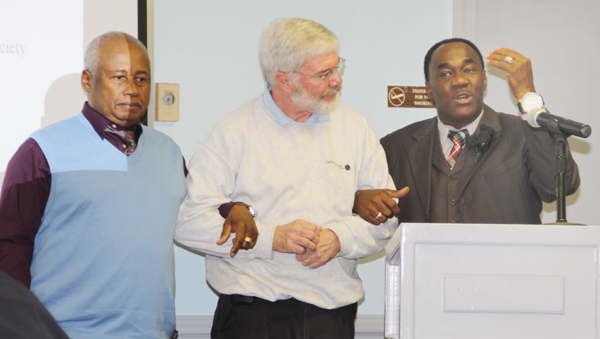 WINTON – Hertford County Public Schools (HCPS) Superintendent Dr. Michael Perry believes that the fabric which thinly holds the local communities together is unraveling faster each and every day.

However, he remains steadfast in an effort to reverse that trend.

In a Jan. 6 meeting at the HCPS Central Office in Winton, Perry was joined by local law enforcement, clergy members and other school staff to solicit ideas on how to strengthen the stitches of society.

Perry said the idea came from the Rev. C. David Stackhouse, Pastor of New Ahoskie Baptist Church and a member of the Ahoskie Town Council, and David Shields, Hertford County Board of Education member and Ahoskie businessman. 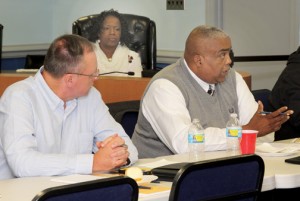 “The concern is the deterioration of relationships within our community,” said Dr. Perry. “Everyone is aware of what’s occurring in our nation with the shootings of our law enforcement officers preceded by the events in Ferguson (Missouri) and New York City.

Perry admitted he has a growing concern about gang activity within HCPS.

“We’ve used the term gang wannabes in the past, but when you start facing up with guns and knives, I take this seriously,” he said. “If we do not address this in a proactive way, it’s going to spill over. We believe the fabric is deteriorating, but we also believe that we can together we can stop this deterioration.”

“I believe our theme should be that all lives matter,” he noted. “We need not just to look at one sector of our community, but to work together to look at all of us because all lives do matter; we need to value each other.”

From the meeting with Stackhouse and Shields, Perry said he is suggesting a series of student assemblies, featuring local enforcement and community institutions, at Hertford County High School and Middle School. There, activities could include “scared straight” types of presentations where those who have been jailed for various crimes can meet with students and share the consequences of bad behavior. 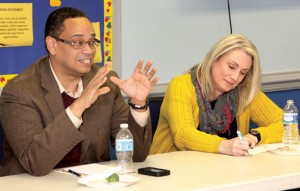 Perry also suggested those assemblies could include how to spot gang related activities. There could also be an assembly with a theme of a “father-son talk” where students can learn how to properly interact with law enforcement officers.

He also suggested an appreciation day for law enforcement.

There was another suggestion of conducting two community meetings – one each in Ahoskie and Murfreesboro – where a combination of the previously mentioned topics, with emphasis on gang activity and interactions with law enforcement, can be discussed.

“We have so many grandparents raising their grandchildren and those grandparents are often at their wit’s end….they don’t know what to do; they feel they’ve done the best they can, but what typically winds up happening is these kids are out walking the streets all night,” Perry remarked. “These grandparents need help; these parents need reminding of what can happen and will happen when these kids confuse the meaning of a prank with just being stupid.”

In the short-term, Perry is looking at two key local events that may help re-energize the local community. Both fall on the anniversary of Dr. Martin Luther King Jr.’s birthday (Monday, Jan. 19).

Communities in Schools of Hertford County is sponsoring an MLK lunch that is open to all from 11 a.m. until 2 p.m. at Riverview School in Murfreesboro. The cost is a $15 donation for adults, and $10 for students in grades 7-12 (K-6 students are admitted free).  Tickets must be purchased in advance.

Also that day there is a 2 p.m. “Justice for All March & Rally” where all races, creeds and colors are encouraged to participate. The group will assemble at the Ahoskie Police Station on Main Street and march to New Ahoskie Baptist Church where the Rev. Ray Faircloth, pastor of Higher Ground Church, will deliver the keynote address.

“We’ve all got to start talking to one another, otherwise Ferguson is going to be in Hertford County,” Perry stressed.

Stackhouse remembers the time where assemblies were commonplace in schools, gatherings used to pass along “community facts” to the students.

“It’s all about respect…how citizens respect those in authority and, in turn, how those in authority respect the citizens,” Stackhouse noted. “I’ve heard it way too many times…how ‘the man’ (police) doesn’t show respect, and in retaliation how a citizen is going to ‘take down the man when he rolls up on me; I’m going to start capping (shooting) first because I know he’s going to cap (shoot) me’.

“What happens when that really takes place here….a local man, down on his luck and feeling there’s nothing to lose, gets high one night and pulls a weapon and starts shooting,” Stackhouse asked. “That’s why we’ve got to be proactive now. We can’t sit on the sidelines and wait. If we do, we’re inviting this type of scenario to take place.

“I appreciate what Dr. Perry has done here; he’s taken the issues Mr. Shields and I shared and developed a plan,” Stackhouse added. “It’s our job – white and black, male and female – now to put that plan into action. We need to teach our young people the same thing our parents taught us – respect.”

“We’ve got to learn how to interact with one another,” said the Rev. William C. Clark of New Bethany Baptist Church. “If you are scared of law enforcement and the only time you interact with them is when we’ve done something wrong, that stigma is there. We need interaction, other than when the police are called to come, so we can make it safe for everyone. We need to let our children be a part of this.”