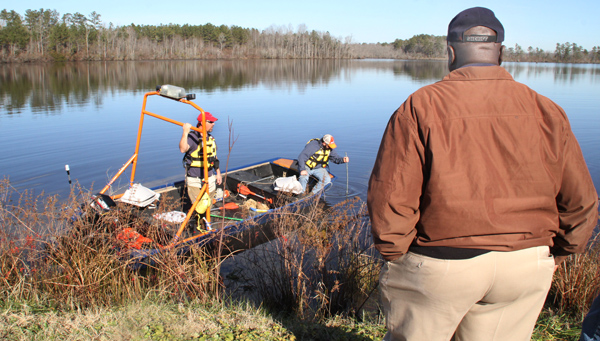 MILWAUKEE – Over a week has passed since the disappearance of Donald Eugene Williams.

Despite several days of probing the waters of Doolittle’s Millpond near Milwaukee as well as the adjacent wooded area, the 45-year-old man remains missing.

Northampton County Sheriff Jack Smith said the next step in the search would be to send divers into the millpond.

“We’ve got that lined up for Wednesday or Thursday of this week,” Smith said Monday afternoon. “We’re hoping the weather will break by then.”

On Saturday, personnel with the Gaston Rescue Squad and Conway-Severn Rescue Squad – using long poles as they stood inside their respective boats – inched their way along the road bank of the millpond. That search produced no clues.

One day later, Northampton Sheriff’s deputies were joined by PERT (Prison Emergency Response Team) to conduct a ground search of the wooded area surrounding the millpond. That effort also failed to produce any results.

“We’re doing everything we can think of to locate Mr. Williams,” Smith stated.

Smith said the search was initiated on Tuesday of last week after his office was notified by family members that Williams was missing. Williams resides in the Lincoln Park area of Rich Square, but a family member told the News-Herald on Saturday that he also lives part-time in Conway.

“We were unable to search on Wednesday (of last week) due to the bad weather (an all-day heavy rainfall) and then Christmas was on Thursday,” Smith said. “We were back out here first thing on Friday where we were joined by NC CERT and our local rescue squads.”

The CERT boat was able to use sonar in an effort to locate Williams in the water, but with no results.

Smith said his office was acting on information from a reliable source that led the searchers to the millpond.

“According to the information we have, the man was seen wading into the millpond and wasn’t seen again after that point,” said Smith. “To our knowledge, this man is unable to swim.”

The News-Herald has learned that Williams has a pending case in Hertford County Superior Court on Jan. 12. There he was scheduled to answer charges for felonious possession of stolen property.