AHOSKIE – Eleven days between games didn’t make a difference as the Ridgecroft School girl’s varsity basketball team downed Lawrence Academy for the second time this season, this time by a final score of 39-30.

In the process, the Lady Rams won their eighth game in a row and took the championship of the 9th annual Lt. Nick Brantley Scholarship Tournament sponsored by United Country Joe Murray Realty and the Roanoke-Chowan News-Herald. 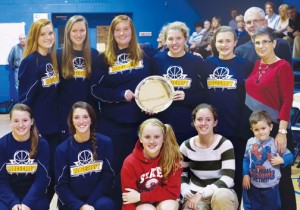 Hennie Larabee finished with 18 points to lead all scorers with 13 from teammate Cameron Basnight, five from Reagan King, and three from Emily Grace.

Ridgecroft downed the Lady Warriors, 33-25, in their first meeting back on Nov. 24.

“I can’t say enough about the way these girls fought the entire game,” said Ridgecroft coach Susan Oliver. “This win is a real credit to their tenacity.”

Lawrence opened the game looking like they wanted a different result from their first meeting.  Wilson scored four of the first six points of the game for a 4-2 Warrior lead and then Daniels was fouled on a drive to the basket and made a three-point play the old-fashioned way and Lawrence was off and running with a 7-3 lead.

But Ridgecroft closed the quarter with a 5-0 run as their defense stifled the Warriors and the Rams staked themselves to an 8-7 lead at the first break.

After an exchange of baskets to open the second quarter, the Rams then reeled off nine points in a row as poor shooting plagued Lawrence.  The Warriors did get a three-pointer from Lauren Baker late in the frame, but the long scoring droughts took their toll and they trailed the Rams, 18-11, at halftime.

Lawrence adjusted their inside game in the opening minutes of the third quarter and managed to creep within six after Hoffman made a pair of free throws to make it 22-16, Rams.  But Basnight went to work at the other end for Ridgecroft and her four points in the paint upped the lead to ten, 26-16, for the first time in the game.  Larabee scored seven points, mostly from following her misses with strong play underneath the basket. Lawrence made just one field goal the entire frame as a 7-2 Rams run closed out the period and had Ridgecroft ahead by 13, 33-20, entering the final quarter.

Larabee was named Most-Valuable-Player and joined on the All-Tournament team by teammate, King.  Hoffman and Brabble also made the all-tourney squad along with Chelsea Rose of Northeast Academy and Sarah Best of Southampton Academy.