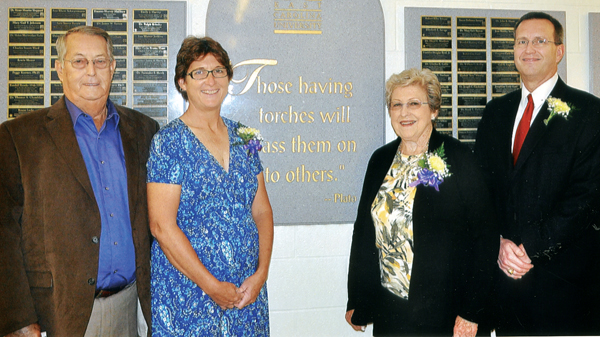 The Smith family – from left: James Sr., DeAnne, Pat and James Jr. (Jimmy) – pose at the East Carolina University Educators Hall of Fame. The family hails from Milwaukee in Northampton County. Pat, DeAnne and Jimmy, all ECU alums, were recently inducted into the Hall of Fame. Contributed Photo

GREENVILLE – There’s definitely a family tradition when it comes to a Northampton County clan and their affection for education.

DeAnne Smith, a first-grade teacher at Eastern Elementary School in Washington, was honored along with 25 other ECU alumni, all of whom are educators, by their recent induction into the according to the East Carolina University Educators Hall of Fame.

The induction took place at the Hendrix Theater in Mendenhall on the ECU campus.

Smith is part of a distinct family tradition — ECU and education. Her grandmother attended East Carolina Teacher’s College, but was forced to drop out due to the Great Depression.

Her brother, Jimmy Smith, graduated from ECU in 1984. He is now an associate professor in the Marketing Department at NC State University where he also supervises student teachers.

DeAnne is a 1982 graduate of NCHS-East. He brother graduated from there two years earlier.

All three – mother, daughter and son – were inducted the same day into the ECU Educators Hall of Fame.

“That was a very special day,” said Pat Smith.

DeAnne Smith, a 1986 graduate of ECU, majored in the Early Childhood Education program, received her master’s degree from ECU in 1989 and is also National Board Certified, she said. She began her career 28 years ago at John A. Wilkinson High School, the precursor to Northside High School. After her first year of teaching, she spent the next seven years at Belhaven Elementary and finally ended up at Eastern Elementary School, where she has taught first grade the past two decades.

The ECU Educators Hall of Fame, initiated in 1999 to permanently acknowledge education professionals and associations who have made distinguished contributions to the field of education through service and mission, features a Wall of Fame in the Speight Building on the school’s campus, Smith said. The Wall features a plaque for each inductee. To be inducted, a nominee must be sponsored by an individual.  The sponsor secures the nomination with a minimum of $1,000 as a gift to the College, which goes toward an endowment scholarship.

The scholarship money is then awarded to incoming freshmen that want to become teachers, according to Kendra Alexander, a major gifts officer at ECU College of Education. Alexander said the college has inducted over 400 people since its establishment.

DeAnne said she originally approached her father (James Smith Sr. of Milwaukee) about sponsoring her mother for induction into the Hall of Fame. Smith, her brother and father were going to split the cost of the sponsorship, but Smith’s father decided to sponsor his wife, daughter and son, Smith said.

“Last fall, I approached him about doing this for my mom and we talked about it and we were just all going to split the cost,” Smith said. “Over Christmas, he decided he wanted to do all of us and he said, ‘Ya’ll are worth it.’ I guess he’s proud of all of us for going to school and becoming teachers. I’m excited about it because I just love ECU, and then to be there with my mom and brother, it’s an honor to me to be inducted with them.”