On Monday, Hertford County Commissioners Curtis Freeman of Ahoskie and Johnnie Ray Farmer of Millennium accepted their respective oath of office after each earned another four-year term on the board following the November General Election. 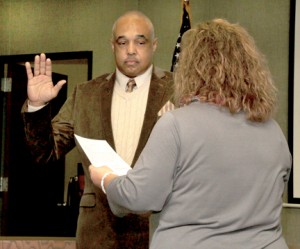 Hertford County Commissioner Curtis Freeman receives his oath of office on Monday morning from Shelia Matthews, Clerk to the Board. Staff Photo by Cal Bryant

With 16 years under his belt, Freeman is the board’s senior member.

“I’ve had the opportunity to work with commissioners we’re all familiar with – the late Dupont Davis, the late Robert Holloman, and Johnnie’s dad (the late Ray Farmer),” Freeman said, upon accepting his oath from Shelia Matthews, Clerk to the Board. “I’m the old fogie here, but my vision remains the same, that of making Hertford County a great place to live.

“I don’t take lightly the support I’ve received over the years,” Freeman continued. “I appreciate that support. I still have an open door policy.”

Freeman added that he is accountable to the citizens of Hertford County.

“The citizens know they can come to me and tell me I didn’t get something right,” he stated. “If I see they are correct, then I’ll tell them that we’ll rectify the issue at some point.”

While Freeman noted the work of the entire board, to include the County Manager, the Board Clerk and Board Attorney, he had special words for Farmer. 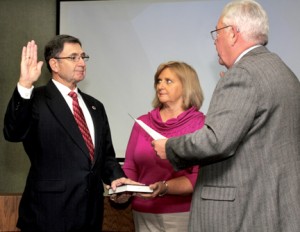 “Johnnie and I have been here the longest; we work well together,” Freeman remarked. “We’ve been through some battles, and I feel certain there will be others we’ll have to fight, but I would encourage the citizens of this county to keep their eyes open because I feel the best is yet to come.”

“It’s been a pleasure to serve the citizens of Hertford County for the past 14 years,” said Farmer who was administered the oath by Murfreesboro Mayor John Hinton followed by receiving a congratulatory kiss on the cheek from his wife, Paula, who held the Bible while her husband was being sworn in.

Farmer said he asked Mayor Hinton to administer the oath.

In addition to thanking his constituents for their support over the years, Farmer also offered praise for his wife.

“She has stuck by me; it’s tough being the wife of a commissioner because of all the obligations we have,” he said.

Farmer hinted that the next four years on the board may be his last.

“This may be my last run,” he stressed. “I hope these next four years are as good as the last 14.”

Following tradition of past early December meetings, the commissioners elected their leaders for the coming year. By unanimous vote, that leadership team remains unchanged as Commissioner Bill Mitchell will continue to sit in the center chair as board chairman while Commissioner Ronald Gatling received the support of his colleagues as vice chairman.