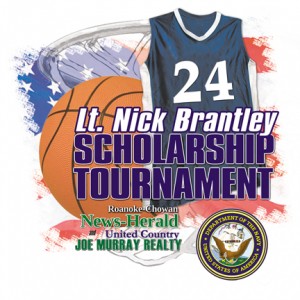 The tournament is held in memory of the late Thomas Nicholas “Nick” Brantley. The Ridgecroft School scholar-athlete and graduate of Virginia Tech lost his life on Sept. 24, 2005 when his Navy Seahawk helicopter went down off the North Carolina coast during a training exercise. He is the son of Keith and Joyce Brantley of the Center Grove community near Ahoskie.

“When you think of a student-athlete, you immediately think of Nick,” said tournament co-sponsor Joe Murray of United Country Joe Murray Realty. “I believe he would be proud of the way we are carrying forth in the true spirit of high school competition.”

The tournament will feature four schools that have participated since the inception of the tournament – Bethel Christian Academy, Lawrence Academy, Northeast Academy and Ridgecroft School. Pungo Christian Academy joined seven years ago, while Southampton Academy from Courtland, VA will be making its third trip to ‘Carolina. Albemarle Academy rounds out the field.

In addition to five days of basketball, three scholarships are awarded in honor of the tournament’s namesake. Each year scholarships totaling $2,000 are given out during the closing ceremonies.

“Both United Country Joe Murray Realty and the Roanoke-Chowan News-Herald are committed to continuing this tradition of aiding our local student-athletes in their endeavor to further their education,” said Cal Bryant, Editor of Roanoke-Chowan Publications.

Murray said to date, three sponsors have pledged their financial supports to the tournament: Tom Fretwell – $1,000; and $500 each from Michael Harrell of Jernigan Oil/Duck Thru, and Attorney Maria Misse and Dr. Ed Misse. All three are repeat sponsors.

“We are proud of the support we have received over the years and grateful for those who are once again giving this year,” Murray stated.

All games begin at 4 p.m. and nightly admission is $5 per person.

The schedule is as follows: