AHOSKIE – A mother and son are left without a place to call home after a fire damaged their residence here Sunday afternoon.

Fortunately there were no injuries. 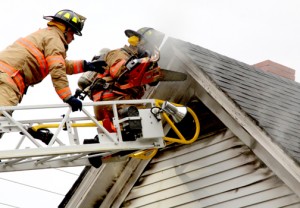 Members of the Ahoskie Fire Department – Stations 1 and 2 – attacked Sunday’s blaze at 420 North Mitchell Street from high, in the middle, and on ground level. Nineteen firefighters and four units were on the scene for nearly two hours. Staff Photo by Cal Bryant

Ahoskie Fire Chief Ken Dilday said the call came in at 3:31 p.m. for the blaze at a two-story structure at 420 North Mitchell Street. That single-family residence is owned by Goldy Jenkins of Ahoskie, who resides in the home with her son.

“When I drove up there was heavy smoke showing from second floor….we hit it just in time as we were able to knock the fire out very quickly,” Dilday said.

The bad news was that numerous household items as well as clothing was smoldering. That led Ahoskie firemen to use additional water in an effort to extinguish those items.

“We were able to contain the fire to that second story bedroom, but there is water damage to the bedroom downstairs located directly below where the fire was,” Dilday noted. “There’s smoke damage in other parts of the home.”

As far as to what sparked the blaze, Dilday thinks it’s electrical in nature.

“According to Mrs. Jenkins, her son left on Friday and may have left an electric heater on in his upstairs bedroom,” Dilday said. “We found a breaker tripped in the (electrical) panel box. The heater may have overloaded the circuit.”

The Fire Chief added that the home was unlivable at the current time.

“We put Mrs. Jenkins in touch with the local chapter of the American Red Cross who always comes to the aid of fire victims,” Dilday stated.

A total of 19 firefighters and four units from Ahoskie Station 1 and Station 2 battled the blaze. The last unit cleared the scene at 5:23 p.m.