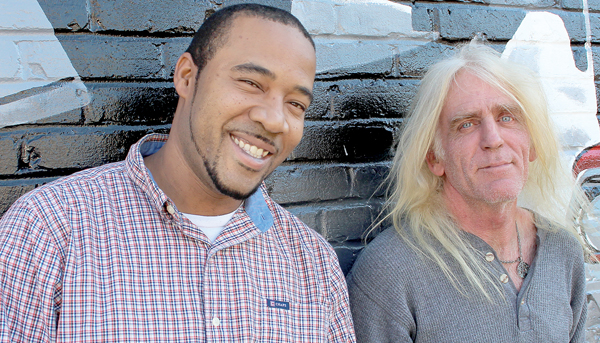 Marvin Ryan (left) and Gary Johnson are the artists responsible for step one of the Ahoskie Main Street Mural Project, using an archival photograph to paint the marquee of the old White’s Department Store (as shown below). Contributed Photos

AHOSKIE – They’re calling it, for now, the Ahoskie Main Street Mural Project, and the two artists who’ve painted the first mural are a collaboration, a tandem realizing a dream.

But that’s what this entire undertaking has always been about.

A joint venture of the Ahoskie Chamber of Commerce, Roanoke-Chowan Community College, and the Washington, DC-based Chowan Discovery Group, the murals will be painted all over the town and in various parts of Hertford County. 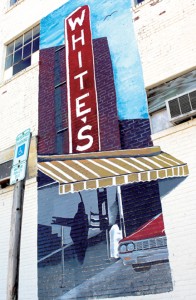 For the downtown projects the art’s theme, or general topics, are: Main Street the way it used to be, the tobacco warehouse on market day, and the town’s appearance when tobacco was in season.

The first downtown project was completed in about five painting days beginning in late October and finishing early last week.  Located on the wall of the building at the corner of Main and Mitchell Streets across from Town Hall, the rendering is of the marquee for the old White’s Department Store that was located almost in the geographic center of Main Street.

Amy Braswell, Executive Director of the Ahoskie Chamber of Commerce, provided archival photographs of Ahoskie’s past for the mural selection.  Braswell also worked with Marvin Jones of Marvin Jones & Associates Photography and chairman of the Chowan Discovery Group which provided the concept, coordination, and some of the funding.

“On my Facebook page, people were writing about their memories of White’s Store,” Jones said in an email. “They spoke about the hot dogs with chili White’s would serve and of all the ‘action’ on Main Street that made the town come alive.”

Following a layout by RCCC Fine Arts instructor Jim Messer, the actual artwork was done by Marvin Ryan and Gary Johnson. Ryan is a welding instructor at the college and Johnson is one of his students.

Ryan actually began as a welding student at the college himself. The Chesapeake native who’d left a career as a brickmason to pursue a new vocation as well as to follow his great passion: painting.

“Mr. Victor Davidson, the head welding instructor said he needed some help, and after I finished class he offered me a part-time job,” Ryan recalls in a telephone interview. “It was a job with good pay, so right then and there I signed up for art class.”

Ryan says he was a painter before he got into structural welding.

“The college just allowed by to go back to school,” Ryan claims. “I feel good to get this opportunity because this is a chance to get more people to see what we can actually do.”

One day when Ryan was just sitting around campus, Johnson walked by and noticed some artwork on Ryan’s laptop computer.

“We just sort of started a conversation about art,” Johnson recalled in an interview. “One thing led to another and later I found myself in his welding class, but our mutual appreciation of art lasted.”

The pair would like to believe they are two of Messer’s best students.

“Some (classmates) take an hour to complete an assignment,” Johnson said. “Marvin and I may take three hours; we’re just that committed.”

Whatever the reasoning, they were the ones selected to be painters on the first mural.

After scaffolding, donated by local businessman Evans Johnson, was erected on Oct. 28, the two students, along with their instructor, began the project one day later.

“We’d also like to thank Mr. Jamie Johnson of ACE Hardware in Ahoskie for providing the oil-based paints and other painting supplies, including paint thinner, rollers, rags, and drop cloths,” said Ryan.

“And we can’t forget Mrs. (Brenda) Velasquez of MugShotz coffee shop for donating the coffee and pastries in the mornings, and the sandwiches at lunch,” adds Johnson.

On Oct. 29 the group ascended the scaffolding, cracked open their first paint can, stirred, and began the task of bringing Ahoskie history to life.

“We painted for four hours that first day,” said Johnson, “then six hours the next day, and finally eight hours on the third day.”

The painters did not work in daily sequence, often having to take off either for work, class, or the weather.

“After we finished the first week of November we then went back and did touch-up for a couple of more days,” said Ryan.

“Sometimes the painting would cause a traffic jam on Mitchell or Main streets,” said Johnson.  “People stood on the street and the sidewalk and watched us work.  Groups of school children would also visit the site.”

While the store conjures up a world of memories for an older generation, neither of the artists are bothered that their younger audience won’t directly connect.

“I don’t even remember this store,” said Ryan with a laugh, “but Mom does and it bought a smile to her face reminiscing about the list of stores that used to be on Main Street.”

Ryan worked on the bottom portion of the painting, with Johnson working the top.

“I just get a great feeling,” said a smiling Ryan, admiring his work. “We all talk about how is the world going to remember me.  Well, for an artist, his identity is his legacy.  It won’t just be how they will remember me, but also this will raise art appreciation right here in my home town.”

Johnson says he believes 17 more murals are planned either for the Town of Ahoskie or throughout Hertford County.  The next two murals just might co-exist right alongside-by-side with the original.

And that would suit two painters just fine.