Local son thanks Vets for their sacrifice

AHOSKIE – It is a day that honors all those who served in uniform, as well as the ones who are still actively protecting our freedoms; it is a salute to warriors who have bled, and sometimes have bled from the heart.

Oftentimes any appreciation and admiration that is expressed cannot the slightest bit match their present. In any case, we can start by recognizing their commitment, and helping them in whatever way we can. 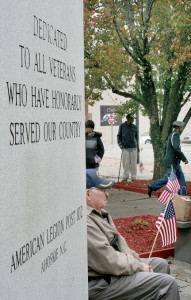 This is our payment – in no small measure – to America’s veterans.

In Ahoskie when they marked “the 11th hour of the 11th day on the 11th month” they did so with spirit and resolve.

First, there was the Veterans Day Parade down Main Street – enacted all across the country on that day, but always more poignant when it is celebrated in a small town.

Specifically on hand for the Ahoskie parade included as special guests the U.S. Fleet Forces Band, the largest of the U.S. Navy’s nine Fleet Bands that provide musical support for ships, military bases, foreign dignitaries, and community events throughout the Mid-South region.  The band is said to be staffed by some of the Navy’s finest and most talented musicians and they had just returned from playing for Military Appreciation Day in Boone, NC last weekend at Appalachian State University.

Leading the 10 a.m. parade was the Hertford County High School JROTC Cadet Corps; first came the color guard and then the battalion.  Local American Legion Post-102 had the first float in the parade, manned by several Legionnaires.  They were followed on foot by the women of the Ladies Auxiliary.

The local Vietnam Veterans Chapter came just before the Fleet Forces Band and they were followed by more floats (Girl Scouts, another Post-102 group, and two members of the Town Council who have served their country in Charles Freeman and Rev. C. David Stackhouse).

The Hertford County High School Band marched up and closed with a musical performance in front of the No Man’s Land Memorial and the parade entourage ended with fire trucks, motorcycles, and tractors.

At 11 a.m., at the Memorial location on the corner of Main and Railroad Streets, Post-102 held their annual Veterans Day Observance.  With Legionnaires handing out miniature American flags, and the Auxiliary handing out poppies, the crowd was welcomed by Post Commander James Hutchinson. The HCHS JROTC Color Guard presented the colors and then there was the singing of the National Anthem and a prayer by Post Judge Advocate Donnie Taylor.

Moore, a local educator, coach, and administrator who grew up in Hertford and Bertie counties, gave a stirring speech beneath the cool gray morning skies.   He says he plans to retire from the National Guard after 30 years of service at the end of this year. Moore pointed out that his NCNG service began as a military private serving weekend duty at the old Ahoskie Armory, and has now carried him through several tours of duty on foreign soil. He began his remarks by giving recognition to those who “planted the seeds”.

“Let us remember our soldiers, airmen, sailors, and Marines who serve us overseas, as well as those who have made the ultimate sacrifice and could not be with us here today,” Moore intoned.

Moore asked current servicemen and veterans present at the ceremony to stand and be recognized, as were also the family members of service personnel.

“Thank you for answering the call of duty,” Moore pledged.  “I salute you; you have made our armed forces one of the most respected around the world.  Others of you have lived through a difficult time and bore a heavy load in order to keep the home fires burning and in good standing. Thank you for your sacrifice.”

Moore said whether veterans served in war or in peacetime, they have forged a perpetual bond.

“For over 230 years, the circumstances that have defined warriors up through generations until today has been valor and dedication,” he said. “Your presence here today is humbling.”

Hutchinson closed out the service with recognition to the local businesses and individuals who assist the Post in remembering what veterans do for the country.

The Ahoskie United Methodist Church served dinner to all veterans and their families following the conclusion of the service.