AHOSKIE – With the number of recent breaking and entering cases on the rise here, the Ahoskie Police Department increased patrol measures to attempt to locate the person(s) involved. 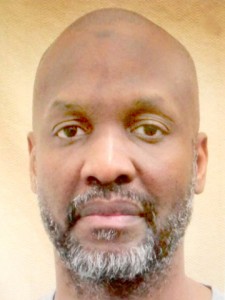 Theodore Roosevelt Spivey, 43 of 108 Bertie Park Lane, Ahoskie, was arrested Nov. 6 after he was caught in the act attempting to commit larceny at the Hertford County Department of Social Services office on Mitchell Street.

Additionally, Spivey was connected, through evidence collected from a previous breaking-and-entering case, to a crime committed at Dixon Cleaners on Main Street.

Spivey was jailed under a $100,000 secured bond and made his first court appearance on Nov. 7.

The break in the case came last Thursday night where APD officers were able to observe a suspicious individual in the area of the Department of Social Services. There, Asbell left his vehicle to perform a foot patrol….checking doors and windows of the businesses in that area.

“As Major Asbell was checking the Department of Social Services building, he observed a glass window broken out, thus heightening his senses that someone may be inside the building at that time,” Fitzhugh said.

Fitzhugh added that Asbell’s hunch was correct as he observed a suspicious person walking around inside the DSS office.

“Once that individual was attempting to exit the building, Major Asbell confronted the suspicious person, leading to the arrest of Mr. Spivey,” Fitzhugh said.

Subsequent to the arrest, several items were recovered from the suspect.

Meanwhile, thanks to evidentiary items collected at the scene of the Dixon Cleaners break-in, Farmer was able to connect Spivey with that crime.

“I would like to commend Major James Asbell, Detective Justin Farmer and the patrol division for their continued efforts to reduce crime in our town,” Fitzhugh said.

According to the North Carolina Department of Corrections, Spivey has an extensive criminal record for felony breaking and entering and larceny dating back as far as 2000 in both Hertford and Bertie counties.