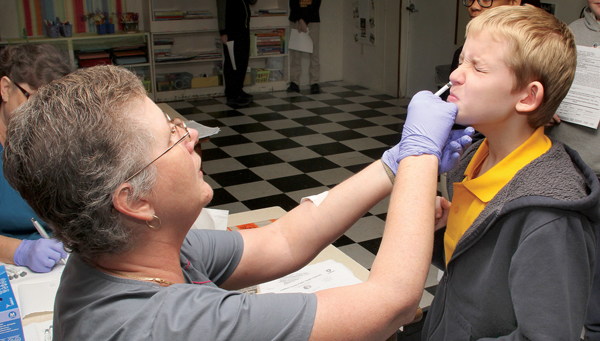 Two “squirts” and back to class.

On Friday, students at three Hertford County public schools were administered the Flu Mist vaccine as a preventive measure to help fight what local public health officials believe to be a very active flu season.

A total of 235 Flu Mist vaccines were administered.

The Flu Mist is a weakened virus vaccine that is sprayed into the nose. Consent forms were signed by the parents or guardians of the children at each of the three schools, which granted their permission to allow HCPHA staff to administer the vaccine.

HCPHA officials stressed that the active virus in the Flu Mist is weakened to the point that it will not give children the flu.

Flu Mist was first introduced in 2003 as an alternative method (as compared to a flu shot) to help prevent the onset and spread of the influenza virus.

Influenza (“flu”) is a contagious disease that spreads around the United States every winter, usually between October and May.

McLawhorn noted that flu is caused by influenza viruses, and is spread mainly by coughing, sneezing, and close contact.  Anyone can get the flu, but the risk heightens among children. Symptoms come on suddenly and may last several days. They can include fever/chills, sore throat, muscle aches, fatigue, cough, headache and runny or stuffy nose.

McLawhorn and other health officials recommend that children, ages 6 months and older, should get an annual influenza (flu) vaccine.

“The vaccine is the best way to prevent the flu,” McLawhorn noted.

The HCPHA staff was split up on Friday to administer the flu mist between the two elementary schools, Ahoskie and Riverview, initially and then came together at Bearfield Primary due to its larger student body.

At Ahoskie Elementary, one class arrived for their “mist” treatment and was able to return to their studies in less than 10 minutes. The majority of the students in that particular class of 5th graders had previously experienced the Flu Mist vaccine treatment.

“We give special thanks to the staff of these schools for their assistance in administering the flu mist,” McLawhorn said.

Flu Mist is currently recommended for all healthy persons at least two years old and under 50 years of age wishing to protect themselves from influenza and its complications, or to avoid spreading the flu to members of certain vulnerable groups. It is recommended for:

All healthy, non-pregnant persons, age 49 years and younger, who want to reduce the likelihood of becoming ill with influenza, or of spreading it to others who meet any of the criteria listed below:

Working or living with at-risk individuals;

Healthcare personnel or other persons who provide direct care to at-risk people (except persons in close contact with severely immunosuppressed persons);

Travelers who may be among people from areas of the world where there is current influenza activity (e.g., on organized tours); and

Students or other persons in institutional/educational settings.

For more information about the flu or to get your flu shot or the flu mist, contact the Herford County Public Health Authority at 252-862-4054.