CONWAY – A Conway man wanted for crimes in Northampton and Hertford counties as well as Franklin, VA was arrested earlier this week.

On Nov. 3, Captain Chuck Hasty of the Northampton County Sheriff’s Office arrested and charged Joshua Simon Hinson, 30 of Conway, for obtaining property by false pretense, forgery of an endorsement, and uttering of a forged endorsement. 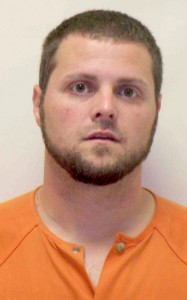 Hasty said the investigation began in August when a Northampton County business reported that a check was returned by their bank as stolen. The checks were reported stolen during a vehicle break-in in the town of Conway.

“The investigation led to Mr. Hinson as being the person responsible for forging, passing and receiving the cash from the business,” Hasty said. “During the investigation it was learned that several other checks were or were attempted to be cashed in other jurisdictions in North Carolina and Virginia.”

Hinson was given a $9,000 bond and made his first court appearance in Jackson on Thursday to answer those charges.

Hasty added that Hinson was also served a fugitive warrant from Franklin, VA for forgery. His bond on that warrant was set at $25,000 and a Nov. 6 court date.

Hinson has pending charges in Hertford County for obtaining property by false pretense, conspiracy, and identity theft stemming from the stolen checks, according to Hasty.