CONWAY – The town’s Board of Commissioners here have a new member.

Stewart Wrenn Woodard was appointed to the Board by a unanimous vote at their September meeting. This appointment was necessitated due to the vacancy created following the resignation of Commissioner B. Lance Jenkins, who moved to Jacksonville. 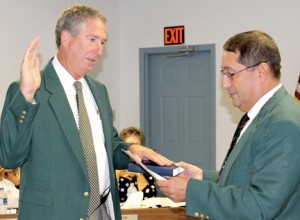 Stewart Woodard (left) accepts the oath of office as a member of the Conway Board of Commissioner from town Mayor Brian Bolton. Contributed Photo

Woodard’s appointment will fill this seat for the unexpired term ending November, 2015.

As a youth, Woodard lived on Garriss Street with his parents, Essie Mae and Shirley Woodard, and his siblings. The fourth of six children, Woodard has three older sisters and one younger brother and sister.

Woodard worked for many years during and after high school at the family business, Small Motors, in Murfreesboro with his father and brother. Currently employed by CRMP (Commercial Ready Mix Products, Inc.) in Winton, Woodard is a member of Conway Baptist Church and the Conway Volunteer Fire Department.

Following his acceptance of the Board’s appointment as Commissioner, Woodard stated, “I love this town. I appreciate the Board’s confidence in me expressed by this appointment. I will be more than happy to serve and represent the citizens of Conway to the best of my ability.”

Stewart was sworn into office at the regular Conway Town Board meeting on Oct. 14 by Mayor Brian E. Bolton.