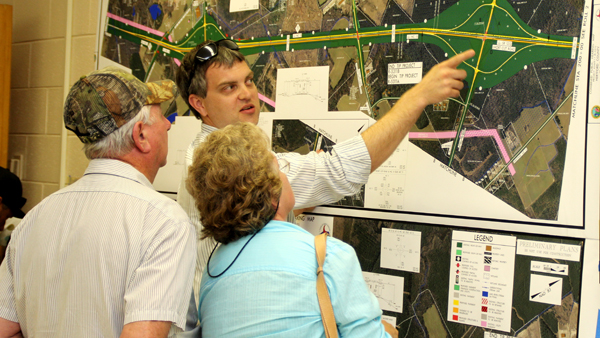 NC DOT representative Ben Crawford points to a specific area along the route of the NC 11 / US 13 project map as he answers a question posed by a local couple. Staff Photo by Cal Bryant

AHOSKIE – A third major highway project is on tap locally.

At a public hearing Monday evening at Hertford County High School, North Carolina Department of Transportation officials formally unveiled plans to widen (to four lanes) eight miles of NC 11 / US 13 from just south of the NC 561 intersection near the Ahoskie Inn to just south of the US 13 / US 158 / NC 45 intersection at Winton.

That project, with construction slated to begin as early as 2016, will tie into a pair of ongoing road improvement efforts – the widening of US 158 from the east end of the Murfreesboro Bypass to Winton, and four-laning US 13 / US 158 from Winton to Tar Heel Barbecue in Gates County.

It was revealed at the public hearing that the project is slated to occur in two stages: Section A (the old “11-and-11” intersection, which will be re-opened with either an overpass or via a Superstreet design) – right-of-way acquisition scheduled for the fall of 2015 with construction getting underway one year later; and Section B (the remainder of the project) – right-of-way acquisition in the spring of 2017 and construction cranking up in 2019.

Local citizens used the public hearing to view large-scale maps of the project.

“There are four alternatives (of where the road will be constructed), so helping us where this project goes, where these improvements will take place, is something we need to hear from you. We want to hear what issues you have once you see the maps of the four alternatives,” said Jamille Robbins, one of several DOT officials attending the public hearing.

Robbins said those alternatives differ in the design features and where the widening will take place. Two follow the route of the existing US 13 (north of Shortcut Road) while the other two widen portions of the existing US 13 and has a new location portion. There is a 46-wide grass median in each of the four proposed routes. The proposed right-of-way through any of the four alternatives varies between 150 feet and 400 feet.

There are several options of how traffic will gain access to the newly improved roadway. The freeway design (full control) is much like an interstate….access is by interchanges only. Limited control allows access from public roads with no private driveway connections. Partial control allows access by one private driveway for parcels with less than 2,000 of road frontage. Additional driveways may be considered by DOT for larger parcels of property. However, if access to any property can be obtained by means of another road, direct access from the new road may not be provided.

There is also the Superstreet design, which is basically an expressway with connecting two-lane roads and private driveways. However, no left turns are allowed at access points. All traffic gaining access to the new road must turn right, travel a short distance and make a u-turn (in a widened area of the new road) if they desire to travel in the opposite direction from their starting point.

Alternative #1 (Freeway, part on a new location): Improving the existing NC 11 and Shortcut Road (the highway between the old 11 & 11 intersection and US 13) from south of NC 561 to US 13. A new roadway, with full control, will be constructed between US 13 at Shortcut Road to the existing US 13 at the NC 461 intersection. The remaining portion of this alternative will upgrade the existing US 13 to a freeway to just south of the US 158 / NC 45 intersection near Winton (tying in to the ongoing four-lane project there). Interchanges along this route will be at the NC 11 / NC 561 and the old 11 & 11 intersections. A grade separated bridge (no access point) will be constructed at Modlin Hatchery Road and the US 13 / NC 461 intersection. All other connecting roads (Firetower, existing US 13 at Shortcut Road, Saluda Hall and Hall Siding) will dead end where they now intersect with either NC 11 or US 13. Estimated cost: $73.1 million. Homes affected: 1.

Alternative #6 (Superstreet, part on a new location): Upgrade existing NC 11 and Shortcut Road from south of NC 561 to US 13. A roadway on a new location, with limited control (access only from connecting road; none from private driveways), will be built from that point to NC 461. Upgrade existing US 13 north from NC 461 to just south of the US 158 / NC 45 intersection. No interchanges will be constructed as a Superstreet design will be utilized at intersections. Estimated cost: $56.3 million. Home affected: 1.

Robbins said DOT will weigh all the public comment and select one of the four alternative routes, hopefully before the end of summer. The selected route is also required to be the least damaging from an environmental standpoint. From that point, a final environmental impact document is slated to be prepared by this fall.

“Public comment is not our only source of choosing a route,” Robbins said. “We have to balance public comment along with engineering criteria, the costs of the project, the traffic, safety and we also look at the impacts to the natural and human environments. It’s a very complicated balancing act.”

Robbins noted that this is a federal aid highway project with 80 percent of the funding coming via federal funds with the remainder from the state.

He added the major element driving the decision to undertake the project is to improve the safety of this particular highway corridor. A Traffic Safety Analysis was conducted along this eight-mile stretch from April 2007 through March 2012. There were 179 reported vehicle crashes during that time period, exceeding the statewide average for rural, two-lane roads. Four deaths via motor vehicle accidents were recorded during that same time period.

“Building a four-lane, divided roadway should help, in many ways, reduce the likelihood of collisions on this highway,” Robbins said. “We also build roads with the future in mind. If we do nothing to this particular road, what will it be like 20 or 30 years in the future?”

A post hearing meeting will be scheduled after June 25.