Yes, there is a Santa Claus

WINDSOR – He didn’t come down the chimney, but he did arrive right on time.

A “Letter to Santa” published last week in the News-Herald and written by a local grandmother was answered on Christmas Eve when the jolly white-bearded, pot bellied wonder sent ‘special elves’ bearing gifts. 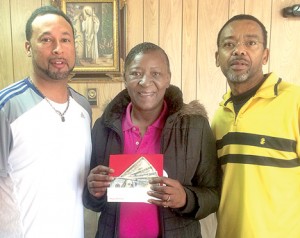 “It was an answer to a prayer,” said Lorraine Sanders-Ford. “There are miracles in the world and people do care.”

Sanders-Ford escaped with her grandchildren from a burning inferno in January of this year that totally destroyed the family home located on US 13 north of Ahoskie. All of Sanders-Ford’s possessions perished in the blaze.

A member of New Ahoskie Baptist Church, she received an outpouring of love and support not only from the congregation and pastor, Rev. C. David Stackhouse, but also from friends, other family, the community, and people she didn’t even know.

While Sanders-Ford has been able to recover, the emotional toll on others in her family over the loss was much greater and the children have been much slower in moving on.

So she sat down and wrote a “Letter to Santa” on behalf of her grandchildren and sent it to the North Pole via the News-Herald.

“Dear Santa,” it began. “I am writing this letter on behalf of my grandchildren. On Jan. 10, 2013 my family and I suffered a fire that was witnessed by myself and my grandchild, Laila. Everything we had saved for and bought had been lost in 15-20 minutes”.

“It (the fire) was an experience for me because I have a lot of grandchildren” says Sanders-Ford, a native New Yorker who re-located to North Carolina a dozen years ago. “I lost my doll collection that I’d had for over 30 years. I just love Christmas as a matter of fact, and over the years I’ve tried to make sure that children that didn’t have, had.”

She and the children had just celebrated Christmas when the fire occurred.

“There was nothing left to salvage,” her letter goes on to say. “I encourage the children with hope, but with no replacement gifts it’s hard on them.  I just wish for them a very special Christmas to show them that all can be replaced.”

“Don’t wash your face or brush your teeth just come down to Hunter’s Funeral Home in Ahoskie as quick as you can,” the minister said.

“So I hurried on down and there was Pastor and Mr. Hunter and he (Hunter) handed me an envelope that he said came from Santa Claus,” she recalled.

“Now go and get your children some Christmas,” Hunter said.

“I was just speechless and my knees were just shaking,” she says. “I didn’t know what to say.”

Up until the gift was received Sanders-Ford had tried her best on her working income to purchase small-value toys for her grandchildren.

“I just wanted everybody to have something for Christmas,” she said.

That night (Christmas Eve) her children found that someone had left them all brand new pajamas and instructions to go to bed, early.

After some coaxing, the children, some eleven in all, finally went to sleep and awoke early the next day.

Under the family Christmas tree at their home near Windsor were presents: bicycles, video games, shoes, DVD’s, and dolls, some wrapped and others open.

“Everybody had something under the tree,” Sanders-Ford observed.

“I was happy just watching them,” she says. “I never thought anything would come of this, so this is truly a blessing.  Later Christmas Day we were able to have a nice dinner.”

Granddaughter, Laila, age 4, was especially devastated by the family’s loss in the fire, some emotional scars from which still remain. Christmas Day, Sanders-Ford says Laila had the most special excitement.

“Santa really came,” the child said; as the grandmother recalled the words from Christmas Day. “I got some of the things I lost in the fire,” Laila said.

“This will help her healing so much,” the grandmother says.

In addition to the helpful elf at Hunter’s Funeral Home, Sanders-Ford says Santa also sent an angel to help her grandchildren from a church in Askewville, the North Carolina Smart Start, and the U.S. Marine Corps ‘Toys for Tots’ program.

“I can’t say thank you enough,” Sanders-Ford emphasizes. “Thank you for making my children’s Christmas so nice. Yes, we do believe.”

Sanders-Ford also found out that one of the other “Letters to Santa” published in the News-Herald came from a family seeking puppies for their children. She wants people to know that the ‘Spirit of the Season’ is also about giving, and giving back.

“We have four female puppies,” she says. “If I can get in touch with any of the families looking for pets, we might be able to help them out because I’m happy to be able to give these dogs away. We received our blessing, and now I want to pass a blessing along.”

And that, she tells us, is the real meaning of Christmas.

WINDSOR – Each day seems to be a return to a sense of normalcy with Bertie County’s Emergency Medical Services.... read more