AHOSKIE – A tip from a citizen led to the arrest of a local man on drug charges here Dec. 22.

Ahoskie Police Chief Troy Fitzhugh reported that Terrance Lamont Harrell was arrested and charged with felonious possession with intent to sell and deliver a Schedule II control substance, and misdemeanor possession of drug paraphernalia. He was jailed under a $40,000 bond and his court date is scheduled for Jan. 3. 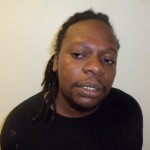 Fitzhugh said that at approximately 11:32 p.m., Ahoskie Police K-9 Sgt. Michael Kellett received a drug compliant from a citizen. After investigating the compliant and following up with same, a call was made to the on duty investigator.

APD Lt. Jeremy Roberts, Kellett and APD Patrolman Jessie Mizelle were able to observe the suspect arrive at the property of the Tomahawk Motel on North Academy Street. Fitzhugh said that when the suspect was about to be approached by the APD officers, he ran towards the front of the building.

Roberts and Kellett were able to slow the suspect down, he said. Then, Mizelle was able to apprehend the suspect without further incident.

“I would like to commend the officers for a great job. We are continuing are efforts to reduce the sale of drugs in our community,” Fitzhugh said.

Fitzhugh reminded the public that the Ahoskie Police Department has a tip line on its website (www.ahoskiepd.com). Fill out the tips in the information area and it will be forwarded to APD investigators.

RICH SQUARE – Outdoor nativity scenes dot the residential and faith-based landscape throughout the world during the Christmas season. However,... read more