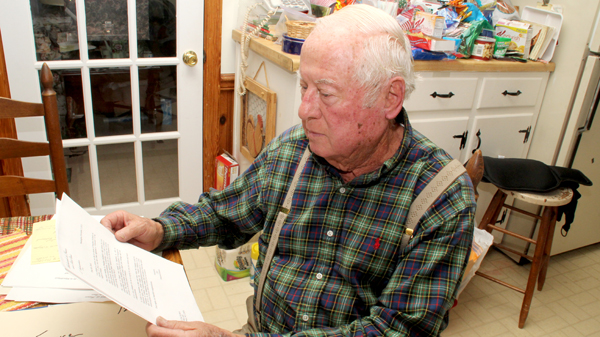 Carl Russell Britt of Milwaukee reads the letter he received from the Ambassador of France to the United States, advising him of his appointment as a “Chevalier” (the medal shown below that he will soon receive) of the Legion of Honor as bestowed by French President Francois Hollande. Staff Photo by Cal Bryant

MILWAUKEE – He was an 18-year-old farm boy, thousands of miles from home in a strange land.

He was cold, hungry and tired…marching through France and Germany, most of the time under heavy fire from an enemy he didn’t know.

Like most of the men of what is referred to as America’s Greatest Generation, Carl Russell Britt of Milwaukee was part of those defending the freedoms of the United States.

He has received a letter from Francois Delattre, the Ambassador of France to the United States, officially advising Britt of his appointment as a “Chevalier” of the Legion of Honor as bestowed by French President Francois Hollande.

“This award testifies to President Hollande’s high esteem for your merits and accomplishments. In particular, it is a sign of France’s infinite gratitude and appreciation for your personal and precious contribution to the United States’ decisive role in the liberation of our country during World War II,” Delattre wrote in his personal letter to Britt.

“I’m still waiting to confirm a date at which time I will receive the Legion of Honor award,” Britt said. “I called the French Consulate in Atlanta, GA (which covers five southern states, to include North Carolina). They promised me they would get to me soon and it will be awarded in Raleigh.”

Britt said he was honored to be remembered for his military service. For that recognition to come from a foreign country made it even more special.

“Sure, I was excited when I read the letter from the French Ambassador and learned of the honor they thought I was worthy to receive,” said Britt.

The Legion of Honor is the top award bestowed upon an individual by France. It was established by Napoleon Bonaparte in 1802 and is divided into five degrees: Chevalier (Knight), Officier (Officer), Commandeur (Commander), Grand Officier (Grand Officer) and Grand Croix (Grand Cross).

Often pausing to hold his emotions in check, Britt shared his story of military service.

Britt was a farm boy, tilling the fertile Northampton County soil near Milwaukee. He desired to follow his older siblings into military service and went as far as to sign-up for Navy Pre-Flight Program training while a senior in high school.

“I took that test and passed it, but my mother was already upset over the fact that two of her sons were already in the service and felt I needed to stay home and farm the land,” he recalled. “I stayed at home for another year until we got another man to take over farming the land and I joined the Army.”

Britt was sent to Camp Blanding, Florida for basic training.

“That was typically 16 weeks of training, but with the war escalating on the European front, mine was cut to 12 weeks because they needed replacements and they needed them fast,” Britt noted. “It got to the point where they were taking men from the Air Corps and putting them in the Army Infantry; they needed men in those foxholes on the front lines.”

Just a matter of weeks after he completed his “hurried” training, Britt boarded a ship and headed to Glasgow, Scotland. From there he and his military comrades crossed the English Channel, under the risk of being targeted by German submarines, and upon landing were transported by train and trucks towards to the French portion of the Ardennes Forest. That area is famous for the Battle of the Bulge, an offensive launched by the Germans in an effort to drive a wedge between the British and American forces in northern France.

“I remember the cold, shivering every night; we were told to keep a watch all the time in our foxhole because the Germans would slip up from the rear and take you out,” he continued. “Instead of taking turns trying to get in a quick nap, we’d both stay awake, with our backs against each other so we could see what was going on in front of both sides of the foxhole. You did what you had to do to survive.”

Britt did survive….only he and one other man in his platoon were not wounded, captured or killed. As the emotion filled his speech and eyes, Britt recalled one particular day when his foxhole buddy from North Dakota was killed during a fierce battle. Britt and his mate were part of a bazooka squad that fateful day.

“I couldn’t leave him out there; I drug him back to the foxhole,” Britt said. “Then a replacement joined me, his uniform all nice and clean like mine was when I first came to the front (line). Now I was the old man with the dirty uniform and unshaven. If you were killed or wounded, the medics would pick you up. The rest of us just kept going, kept moving.”

The troops of the 70th Infantry did keep moving, taking on German forces and defeating them at Phillipsbourg and at Wingen. They moved again to an area south of the heavily fortified German town of Saarbrucken in mid-January and patrolled aggressively until the arrival of the rest of the division on Jan. 18, 1945. The men of the 70th improved their defensive positions and launched a series of combat raids along a line running from Sarrguemines to Morsbach through mid-February and prepared for the drive into Germany.

“I remember the Germans and their use of the 88 (an anti-tank artillery gun); it was their most used weapon during the war and it was precise; they could drop one of those shells in your pocket,” Britt noted. “There was one shell that landed in the mud right at my feet, but it didn’t go off….it was a dud, thankfully.”

He recalled other times where 88 mm shells would explode so close that it would knock him off his feet.

“You find yourself dazed, and then clawing to pull yourself back up and keep going,” Britt remarked.

On Feb. 17, the division attacked just below the SaarRiver and captured the high ground overlooking Saarbrucken. The French town of Forbach was liberated, and the 70th advanced to Stiring-Wendel where over 1,000 allied prisoners were freed in one of the first of such actions along the Western Front. Continuing its advance, the 70th made a night crossing of the SaarRiver on March 18 and captured Saarbrucken after two days of fierce fighting. The Siegfried Line was pierced north of the Saar and several cities were captured including the large town of Volklingen. On March 21, elements of the 70th Division and the Third Army units met forming the Saar Pocket. The division then participated in the destruction of enemy forces in the SaarBasin until the war ended on May 8, 1945.

After the war, Britt re-enlisted and spent his last 18 months stateside in the Army Signal Corps. He held the rank of Sergeant at the time of his honorable discharge.

Britt briefly worked for Continental Oil Company in Louisiana before coming home to Northampton County. He found his true calling – that as a teacher and educational administrator – after graduating from East Carolina Teacher’s College (now East Carolina University). In 1950 he launched what turned out to be a 42-year career in education as a history teacher and later assistant principal at Colerain High School. He moved from there to Woodland High School as Principal. When Northampton County consolidated its public schools on the early 1960’s, Britt transferred to Northampton County High School and remained there over 20 years as assistant principal and history teacher. After retiring from public school, Britt spent the final six years of his educational career as Headmaster at Northeast Academy.

He also worked as a land surveyor for the ASCS office in Jackson for over 50 years.

“It’s been a full life,” said Britt, now 87 years young. “My health is good. I keep myself busy every day. I always like to say to plan for a thousand years, but live one day at the time.”

Just like it was on the front lines of lands far away, Carl Russell Britt keeps on moving. Soon he’ll wear a French medallion that will serve as a constant reminder to his daily creed.