According to an online article published Thursday by the Sampson County Independent (www.clintonnc.com), Bracy signed a contract the same day to become Superintendent of the public school system there (located in the southeastern part of the state). 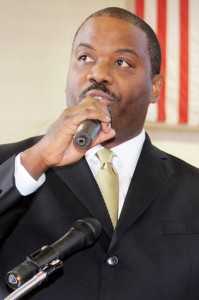 The Sampson County Board of Education selected Bracy as its new superintendent during a special-called meeting Thursday morning.

“We feel like he’s a quality person,” Sampson County Board of Education Chair Telfair Simpson told the Independent after Thursday’s meeting.

Simpson explained that the school board had been working diligently since September to find the system’s next school chief, describing the experience of wading through many applications and conducting numerous interviews as “not a quick or easy process” but one that he felt had led the school board to the right person for the job.

The Roanoke-Chowan News-Herald contacted the Northampton Schools Central Services office, but no reply was received by presstime of Saturday’s edition.

Present at Thursday’s meeting in Clinton and accompanied by his wife of 14 years, Janelle, a Pre-K teacher, and their three daughters, Bracy addressed those in attendance, calling being chosen for the county’s superintendent position “an honor and a privilege” and thanking the school board for its trust and confidence in him, according to the Independent’s published report.

“We are excited that, as of today, (we will) be a part of the Sampson County Schools family,” he said on behalf of himself and his family, adding that he had been excited about the opportunity since the day of his interview with the school board.

“I’ve been very blessed in my life, both personally and professionally,” Bracy continued, mentioning some of his previous jobs in education “but the highlight of my career is today,” adding that the only thing that could make the experience “dearer and sweeter” would be if his late mother could have been present to enjoy the moment with him and his family.

In looking forward to taking the helm of Sampson County Schools, Bracy stressed that he is “ready to work and ready to work collaboratively” to “take the schools from where they are to where we want them to be.”

Promising to “hit the ground running,” he noted that he was looking forward to getting to know and working with all those in the county school system to “make sure this district is about all students” and to provide all those students with a “first class, world class” education that will get them to graduation and prepare them for college and beyond.

“I’m not coming here looking for a job,” he shared, noting that he had told the school board the same thing throughout the application and interview process, “but for an opportunity to serve.”

Bracy will officially begin work Feb.1, 2014, earning $135,000 annually. Until then, interim superintendent Mike Warren will continue to lead the system as he has done since August following the departure of previous superintendent Dr. Ethan Lenker who left the post after five years to lead Pitt County Schools.

Bracy was named Superintendent of Northampton County Public Schools on May 28, 2008 following a unanimous decision of the local school board. Prior to that he had served as Executive Director of Student Support Services for Durham Public Schools.

Though not technically a native of Northampton County, Bracy grew up in nearby Weldon and Roanoke Rapids. However, his family roots run deep in Northampton County as both of his parents are natives of the county and he spent a great deal of time in the Margarettsville area and even drove a tractor helping relatives farm the land there.

Northampton County not only played a role in Bracy’s upbringing, but helped shape him as a young educator. His first teaching job came in 1998 at Squire Elementary School near Gaston where he taught fourth grade.

JACKSON – “This is the county’s history that is falling apart.” Those words, spoken by Northampton County Register of Deeds... read more