AHOSKIE – When it comes to preparing local high school students to compete in a worldwide market, no stone needs to be left unturned.

An initiative, led by NC New Schools, is gaining momentum this year with the addition of seven high schools, including Hertford County High, to take part in the North Carolina Investing in Rural Innovative Schools program. The initiative, now in its second year, began with five high schools. 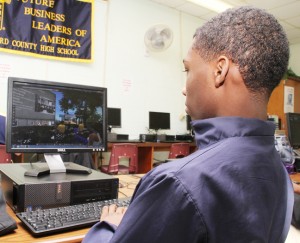 “This is an EarlyCollegeHigh School concept on a high school campus,” said Teresa Watford, a counselor for the program at HertfordCountyHigh School. “They do not receive a (college) degree, but they do receive college credits and those credits can be transferred to the college or university of their choice.”

As an example, Watford said one current HCHS senior will graduate in June and then enroll at Winston-Salem State University as a second semester sophomore due to the credit hours they earned through the Rural Innovative Schools program.

“She has really taken advantage of this program; she has earned a lot of college credits,” Watford said of the student.

Currently, HCHS has 102 students (juniors and seniors) involved in the program: 43 enrolled at East Carolina University, 33 enrolled at UNC-Greensboro, and 26 enrolled at Roanoke-Chowan Community College.

HCHS Principal James Futrell stressed that he would like to see those numbers grow, saying that other juniors and seniors at the school can enroll in the program after the Christmas/New Year holiday break.

Students in the program are able to get a head start on college by taking courses through local community colleges, tuition free, along with academic support from their high school teachers. Teachers in the high schools receive intensive classroom-based coaching to better engage students through active learning that demands them to “read, write, think and talk in every class, every day.”

Thanks to the Rural Innovative Schools program grant funding, students are also able to take online college courses at no cost, to include textbooks, from East Carolina University or the UNC-Greensboro iSchool.

“There is an instructor each from ECU and UNC-G online who provide all the instruction; we have one of our teachers serving as a facilitator in our online labs to monitor and track their progress and make sure the students are on task,” said Futrell.

To add an element of modern day technology, the students create their own “avatar” (a three-dimensional character) that is able to stroll through a college campus setting and sit in a virtual classroom. The instructor is also an avatar character.

“The instructor teaches, complete with notes on a screen, and the students learn, ask questions and interact with others, similar to a traditional classroom setting,” Watford explained.

“It’s a classroom without walls,” said Futrell. “Without today’s technology we would not be able to offer this to our students. Well, I guess we could but it would take our students having to drive to Greenville or drive to Greensboro to receive this type of education.”

The only investment on HertfordCounty’s end of the deal was to provide the infrastructure.

“We had to upgrade our computer technology to make this happen,” Futrell said. “What ECU requires to run the programs is advanced technology. We had some old computers that completely shut down when the students logged-in. We went to Dr. (Michael) Perry (Hertford County Public Schools Superintendent) and our Board of Education for the money to upgrade. They were gracious enough to allow for that. Like us, they saw it was an investment into our students for the betterment of their education.”

Futrell added one other important point, saying, “Without that investment into education, especially this unique type of education that allows our young people a chance to get an important head start on the next phase of their lives (college), our students will be left behind in today’s world.”

Watford said the feedback from the students has been very positive.

“They are the biggest recruiters we have to promote this program; they are spreading the word to their friends and classmates about this program,” she stated.

So, just how are the HCHS students fairing in the program? So well that Futrell mentioned an email he received from a UNC-Greensboro instructor promoting the fact that HCHS students taking online biology classes were outperforming the students taking the same course through traditional means on campus.

Getting the early jump on college can mean significant savings for the parents of the children involved in the program. As earlier mentioned with the one student set to enroll as a second semester sophomore, that translates into her parents having to pay only two and one-half years for a college education instead of four.

“You can also look at that another way,” said Futrell. “Posting the grades that we’ve seen already from our students makes them more attractive to receive scholarships and other grants, further reducing the cost of a college education for parents. It’s a win-win-win scenario all the way around.”

Watford mentioned another “win” in that scenario.

“When the parents save money on college tuition, that’s money they can spend on goods and services right here in Hertford County….that helps us all,” she stressed.

As the program advances, Watford wants to see it expand to involve other colleges and universities. She mentioned an effort to get the aviation program now offered at Elizabeth City State University onboard as well as partnering with Chowan University and its School of Education.

Dr. Perry is also a big fan of the Rural Innovative Schools program.

“We’re in a time in public school education where we have to acknowledge the fact that there are other choices, other avenues to take, for students,” Perry noted. “For us to be the choice for the general public, we have to make sure we are giving the best bang for their buck. Being able to have our students receive college credits at no cost to the parents is big. That gives us a competitive edge over the other options out there. This program allows our students to be measured right alongside the success stories we all hear from the students enrolled in larger school systems across our state.”

Perry said the Rural Innovative Schools program was part of the federal “Race to the Top” initiative.

“Our state was one included in this initiative and there were counties that wanted it,” he said. “One of the best innovations in public education over the past 15 years has been Early College (High School). This grant was designed to bring the innovations of Early College to our traditional public school settings. When it was offered to Hertford County, I jumped at the opportunity to bring it here.”

Perry praised the work of Watford and Futrell.

“They’ve done an awesome job,” he said. “They took this grant and ran with it. Mrs. Watford sees the big picture; she sees what this can do, and is doing, for our students in the long run. She and Mr. Futrell are making it happen for our students. They’re putting our students and our high school on the state and national map.”

The initial grant received at HCHS is good for three years. Futrell said there is a current effort underway to sustain the grant outwards from its initial concept. Perry added that the initiative was seeking corporate backing for long-term implementation.

“They understand, in particular in rural counties like ours, there are no funds to sustain a program like this,” Perry said.

Parents interested in enrolling their children in the program are encouraged to contact Watford or Futrell by calling 252-332-4096.

The initiative calls for each school, at the end of three years, to have increased its graduation rate by 10 percent, reduced its dropout rate by 10 percent and for students to graduate from high school with significant college credit on their transcripts. Students have the opportunity to earn up to 21 credits, or about six or seven courses. Initially, 10th graders participating in the program take a college course in study skills, then as 11th and 12th graders, they choose from pathways that meet their needs.

WINDSOR – Each day seems to be a return to a sense of normalcy with Bertie County’s Emergency Medical Services.... read more