To Santa: From the heart

WINDSOR – It was a simple letter, really, written on loose-leaf notebook paper and so lightly grease-stained.

A grandmother was writing to Santa Claus on behalf of a child; and not one, but several. But particularly one youngster still feeling the emotional effects of loss at this time of gain.

“Dear Santa,” it begins. “I am writing this letter on behalf of my grandchildren. On Jan. 10, 2013 my family and I suffered a fire that was witnessed by myself and my grandchild, Laila. Everything we had saved for and bought had been lost in 15-20 minutes.” 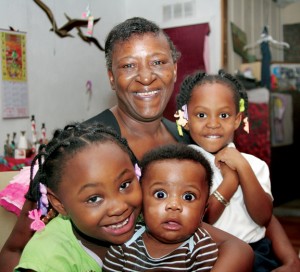 Lorraine Sanders-Ford poses with three of her grandchildren (from left) Amina Smallwood, Ryan Sanders, and Laila Smallwood at their home near Windsor. Sanders-Ford lost everything in a house fire 11 months ago, but still wrote a poignant ‘Letter to Santa’ on behalf of the children. Staff Photo by Gene Motley

Lorraine Sanders-Ford escaped with her grandchildren from that inferno on US 13 north of Ahoskie on that cold January day, but all of her possessions perished in the blaze.  A member of New Ahoskie Baptist Church, she received an outpouring of love and support not only from the congregation and pastor, Rev. C. David Stackhouse, but also from friends, other family, the community, and people she didn’t even know.

“We’re truly blessed because we’re still here, you know,” she says with a smile seated in her modestly furnished rented home on Mt. Olive Road near Windsor.

Nearby, her granddaughter, Laila, age 4, plays near the family Christmas tree.

“Who’s coming, Laila,” the grandmother asks. “Who’s going to fill up all those bags?”

Laila asks for books, and of course, toys. She hopes they will appear under her tree tomorrow (Christmas).

“It (the fire) was an experience for me because I have a lot of grandchildren” says Sanders-Ford, a native New Yorker who re-located to North Carolina a dozen years ago. “I lost my doll collection that I’d had for over 30 years. I just love Christmas as a matter of fact, and over the years I’ve tried to make sure that children that didn’t have, had.”

She and the children had just celebrated Christmas when the fire occurred.

“There was nothing left to salvage,” her letter goes on to say. “I encourage the children with hope, but with no replacement gifts it’s hard on them.  I just wish for them a very special Christmas to show them that all can be replaced.”

After the fire, Sanders-Ford began work on a book of poems and prayers she had written called, ‘Poems from the Heart’, that she sells for a small fee. The last poem in the small 20-page pamphlet is entitled, ‘Today’.

‘Today I feel better than I did since the fire,” it begins. “Our church family encourages us that we are truly blessed by the man above and everything will be okay. All this shall pass like another day.”

Her church family support from New Ahoskie Baptist Church also comes from the church knowing Sanders-Ford has been there for them as well.

“They are one of the most dedicated and committed families in our church,” said Rev. Stackhouse. “When it comes to putting love in action, this family personifies it.”

Sanders-Ford helped out with the church’s youth ministry in its after-school and summer camp enrichment program, but had to curtail her activities in moving from Hertford County.  A few months after the fire she and her family were able to re-locate in Bertie County thanks to a generous landlord. Sanders-Ford is hoping one day to own a home of her own.

“She just gives of her time, her energy, some of everything for the whole family,” Rev. Stackhouse adds. “We’re elated and it doesn’t surprise me that she would extend herself on behalf of her children like that.

Sanders-Ford says young Laila is still emotionally challenged in dealing with life after the fire.  She says the child understands loss, but the horror of so many other things often return to her in dreams and even at school.

Laila and her sisters, Ivory and Amina, along with her mother, Lisa, live with the Fords. Eddie Ford, the father, does contracting work. A new addition to the family, baby brother, Ryan, four months old, was born after the fire.

“I’ve been taking care of children for a long, long time,” Sanders-Ford says as she points to a wall of photographs. “I couldn’t think of anything more than seeing them finish school, going on to college, and being successful.”

Sanders-Ford wraps up her letter with a plea and a promise.