WELDON – A former Marine and school counselor whose career path eventually led to the church pulpit is now considering another lifestyle – a politician.

The Rev. Franklin D. Williams, Jr. – who currently serves as the pastor at Roanoke Chapel Missionary Baptist Church in Jackson, and Canaan Missionary Baptist Church in Ahoskie – has announced his candidacy for the North Caroline House of Representatives, District 27. That seat, which covers Northampton and Halifax counties – is currently held by four-term incumbent Michael Wray of Gaston. 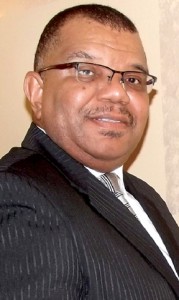 “It is with great anticipation that I accept the challenge of political life,” said Williams in a press release. “While meeting people and helping to make their lives meaningful comes natural due to my spiritual calling; it is important to build our community as a whole. I believe that rural communities yield some of the most productive citizens in our district, state, and our nation.  It is important to me that our young people are given the best educational opportunities possible to compete in a global economy.”

Williams, who resides in Weldon, has previously worked as a school counselor in Northampton and Halifax counties.

“As leaders of today, we cannot sit back and allow educational systems to be dysfunctional, nor can we afford to become comfortable in being average,” he stated. “Northampton and Halifax County citizens have worked hard to overcome barriers in socio-economics, equality, limited resources, and declining job market.  We must invest in our future by developing and implementing a comprehensive educational model at every grade level and throughout our community college system.  Our young people deserve the opportunity to participate in an educational system that allows exposure to 21st century concepts and learning models.”

He continued, “I have witnessed educators, who have worked themselves to the brink of collapse, due to a lack of resources and materials.  Highly qualified educators, who have achieved high marks of proficiency must be recruited, retained, be given adequate resources, and rewarded by being compensated accordingly.”

Williams, a native of Pitt County, said he believes his diverse background makes him an ideal political leader.

He served in the US Marine Corps as a communication specialist with the 22nd, 23rd and 24th Marine Amphibious Units and served in 10th Marine Regiment as a Communications Chief.

After his military service, Williams entered into Pitt Community College where he received an Associate of Arts in Business Administration, and an Associate of Arts in Liberal Arts.  While at PCC he received his call to the ministry. While serving as a youth pastor in local congregations, Williams was afforded the opportunity to be dually enrolled in Liberty University in Lynchburg, VA and East Carolina University, respectively earning a BA in Theology and a BS in Business Administration.

Williams decided to pursue human service endeavors and completed a dual Masters of Science in Rehabilitative Counseling as well as Substance Abuse Counseling. He is currently a dually licensed therapist coping with mental health and substance abuse populations.

While enrolled in graduate school, Williams was socially and politically active, holding offices in the Southern Christian Leadership Conference, NAACP, and the Pitt County Ministers’ Conference.

Williams was called to his first pastorate in 1990 at First Baptist Church in Colerain. There he was an active member of NAACP of Bertie County, Youth for Christ, Inc., West Roanoke Missionary Baptist Association, and the Chamber of Commerce. He also worked in close conjunction with various coalitions helping under privileged students to obtain assistance for college and job opportunities.  One of his accomplishments was program developed in collaboration with the Chamber of Commerce to provide job training and support for single mothers.

“It is imperative to get beyond political leaders who are filled with emotional rhetoric without results,” Williams said. “Our political agendas should not produce unfulfilled promises, but tangible results that can be measured for the purpose of accountability. In addition to educational concerns in both counties, job development, economic growth and sustainability are high priority concerns. In order to attract companies that pay decent wages, our educational system must be comprehensive and high achieving in proficiency and growth.”

He said another area of concern is a lack of support for mental health services.

“While our current economy has forced many mental health providers to suffer major setbacks, we must ensure that our citizens have accessible mental health assistance,” he stressed. “The impact of unemployment, lack of sustainable jobs, and inability to access needed financial support has caused major mental health concerns throughout our region; those who suffer have limited access to quality and affordable mental health care.  I have witnessed mental health professionals, who work tirelessly, only to suffer pay cuts, long hours, and eventually be forced to seek employment in other areas, when their assistance is needed in our communities.”

Williams closed by saying, “I am not one who has lived above the citizens, but I am one who lives among the citizens. I am familiar with the problems because I have felt the pains of the problems.  I am entrenched in the problems of our communities on a daily basis. I observe the anguish and pains of our parents, children, co-workers, educators, unemployed, and the elderly.  I have seen the hope and potential of young people diminished to hopelessness due to rhetoric without responsibility.”

For more information, Williams said he welcomes visitors to his FaceBook page (www.facebook.com/fdwilliamsjr).

WOODLAND – Excessive speed is to blame for a single-car crash that left an Aulander man dead near here Tuesday... read more