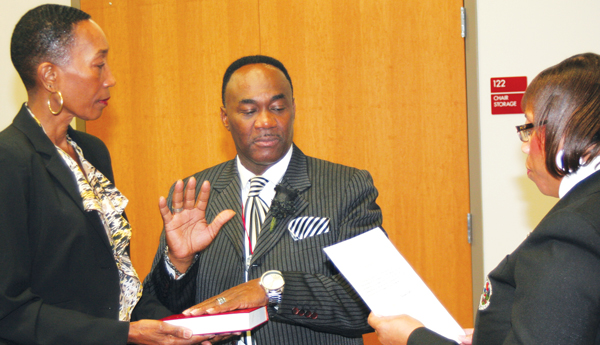 AHOSKIE – They’re in, and they’re ready to go to work.

A pair of newly elected, and one re-elected member of the Ahoskie Town Council were sworn in at a ceremony Tuesday at the Ahoskie Fire Station prior to the regularly scheduled monthly council meeting. 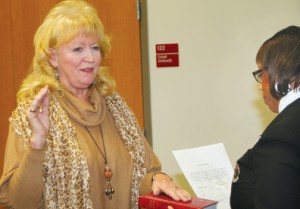 Linda Blackburn (left) is sworn into office as Ahoskie Town Council Member-At-Large during a ceremony prior to Tuesday’s council meeting. Blackburn, a former Mayor of Ahoskie, was also selected by her fellow council members as Mayor Pro Tem. Staff Photo by Gene Motley

Former Hertford County High School DECA teacher Charles Freeman, elected in November after defeating HCHS principal James Futrell, was sworn in with his grandchildren, Cyrus and Aurora Freeman, holding the Bible as Mayor G. Brien Lassiter read the oath of office. Freeman, the representative of Ahoskie Ward-A, succeeded Malcolm Copeland who chose not to seek reelection after a dozen years in office. Copeland was honored after the swearing in.

Former Ahoskie mayor Linda Blackburn is returning to council as member-at-large after being elected to her own four-year term when she defeated challenger Charles Reynolds in the November municipal election. Blackburn had originally been appointed last year to fill the unexpired term of O.S. “Buck” Suiter, Jr., who resigned.

Blackburn was also elected by her fellow council members to serve as Ahoskie Mayor Pro Tempore when Councilman Maurice Vann made a motion to place her name in nomination, seconded by Councilwoman Elaine Myers, and approved unanimously by the Council.

Following the conducting of town business, there were two resolutions of appreciation to the retiring Council members. 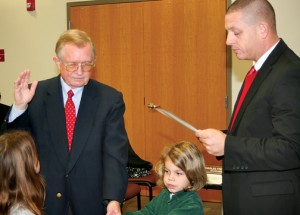 Copeland also received a resolution of commendation from the North Carolina League of Municipalities, made at their annual meeting in October, for “upholding the standards of excellence in municipal government.”

Hardy’s resolution praised his service over his four years on Council, with particular emphasis on his tireless work and devotion to the betterment of the town and his community.

As a comic sidebar following the presentation of the resolutions to the two former Council members, Mayor Lassiter noted, rather tongue-in-cheek, that as a formality the resolutions have to be approved by the Council.

Saying it was a historic moment, Rev. Stackhouse made the motion of acceptance: citing that it was his first motion made as a Council member.

WINDSOR – A temporary restraining order has been issued against the private ambulance service, First Med, restraining it from removing... read more