AHOSKIE – Despite Hertford County High’s loss to Jacksonville Northside in the second round of the NC High School Athletic Association state football playoffs, the second time the Bears were eliminated in round-two, senior quarterback Ryan Weaver closed out an outstanding career on the gridiron. 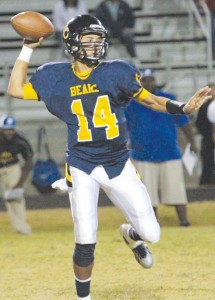 Weaver passed for 3,103 yards in his two-year career for a school passing record. This year he totaled 1,953 yards and 17 touchdowns. In 2012 he passed for 1,150 yards and 13 touchdowns giving him 30 touchdowns, which is also a school record.

In 2012 the Bears were 8-4 and lost to Washington in the second round of the 3A playoffs.   This year HertfordCounty finished at 7-6.