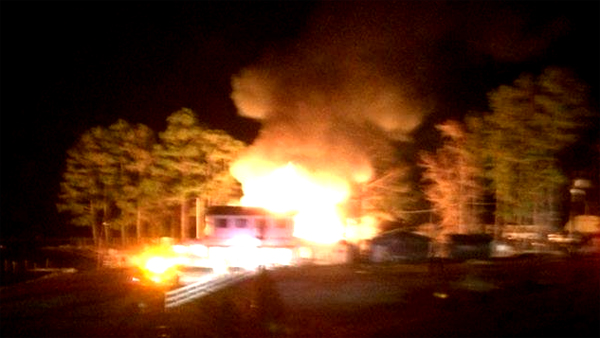 WINTON – Over the years it has withstood the wrath of Mother Nature due to several brushes with hurricanes and nor’easters.

Saturday night, an enemy of a different element caused the destruction of a long-standing landmark along the banks of the Chowan River at Tuscarora Beach.

Riverside Restaurant was leveled by a wind-whipped fire that was fought by three local fire departments. 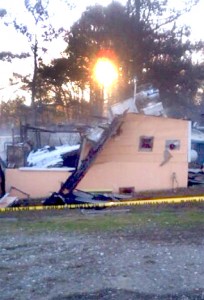 Sunday morning’s sun rises over what once was Riverside Restaurant at Tuscarora Beach. Contributed Photo by Jean Dail Jones

Will Liverman, Assistant Chief of the Winton Fire Department, told the Roanoke-Chowan News-Herald that the cause and origin of the blaze remains under investigation.

“The wind didn’t help things at all, it was blowing down the river at over 20 miles-per-hour,” Liverman said.

He added that flames were showing from the restaurant upon the arrival of the Winton firefighters sometimes after 10 p.m. (the restaurant’s closing time on Saturday).

“The embers from the fire, pushed by the wind, sparked a woods fire near a residence at the beach,” Liverman said. “We were able to knock that fire down before it got out of hand.”

That home is owned by Marshall Askew, a longtime resident of Tuscarora Beach.

“The brush fire started right behind my metal barn; it was a big fire, if they hadn’t put it out as quickly as they did it would have burnt me down too,” Askew said during a telephone interview early Sunday afternoon.

“The wind was rough; the smoke covered my whole house and was so awful that I didn’t dare go outside,” Askew added. “At one time it was so bad that I couldn’t see the fire trucks through my window. I was also worried about the top of my house with all those sparks and the vinyl siding from the heat.”

Liverman said the Winton firefighters were on the scene for over four hours. They returned briefly later Sunday morning to extinguish a “hot spot” that rekindled due to the persistent wind.

Askew said the road leading to the beach was busy on Sunday.

“They’re wearing the road out today….people are coming down here curious to see what happened Saturday night,” Askew said.

An earlier report concerning the ownership of the restaurant was incorrect. Brent Rowlands of Suffolk, VA still owns Riverside. He rented it to Jeff Hahn, with an option to purchase. Rowlands said the option has not been exercised.

“It’s been something down here for a long, long time…..starting with Pete Whitley operating a hamburger/hot dog stand before it was closed in and later became a full service restaurant,” Askew stated.