The commissioners unanimously agreed to hire Lamb at a salary of $156,800. 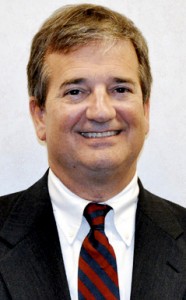 A special meeting was held on Monday to approve the contract and introduce Lamb to department heads and the public.

Lamb said he was excited about coming to Nash County, adding that Nash County Manager position was the only one he had applied for.

“It’s bittersweet leaving Chowan County,” Lamb said. “But I believe this is the county that is perfect for me.”

Lamb said he has a love for county government.

His father was a county commissioner in Dare County and Lamb followed suit, becoming a commissioner in Pasquotank County in 1988. He left the board in 1997 after accepting a full-time job in Raleigh.

“I really love county government so in 2000 I became a  county manager” he said. “I want to make a difference. That’s why I’m in local government.”

Lamb said he was a very finance minded manager. He said he had helped get Chowan County’s fund balance from $2 million to $6 million during in the two years he’s been with them.

Lamb said when he officially comes to Nash County on January 1, he plans to familiarize himself with the county by going out in the community and getting to know all the municipalities.

Lamb said he also wants to meet with department heads and find out about their programs and goals.

Lamb said he also wants to focus on tax collection, adding that the higher a county’s collection rate, the lesser the chances are a citizen’s tax rate will have to go up.

He said he looks forward to beginning work on January 1.

“I sincerely appreciate the opportunity and hope to make you proud in the future,” Lamb told commissioners.

“I look forward to being part of the Nash County team,” he added.

Wayne Deal is currently serving Nash as its Interim County Manager after the commissioners terminated the contract of Bob Murphy in July. Murphy had served as Nash County Manager for 12 years.

According to Deal, over 20 applications were received for the position. The Nash Commissioners narrowed that list to nine and then reduced it to the final two. Both of the finalists, including Lamb, met with the Nash Commissioners on Monday before the board made their announcement on Tuesday.

Lamb announced in November of 2011 that he was leaving Bertie to accept the manager’s job across the river in Chowan County. There he was paid $116,000 annually and provided a residence.

Slightly more than one year prior to leaving Bertie, Lamb’s annual base salary was increased from $101,725 to $144,000. Adding in the travel expenses and other perks, his total compensation package in Bertie stood at $153,000.

(Amanda Clark is a Staff Writer with the Nashville Graphic. The article and photo are reprinted with permission; additionally, RC News-Herald Editor Cal Bryant contributed to the story.)