All gave some; some gave all 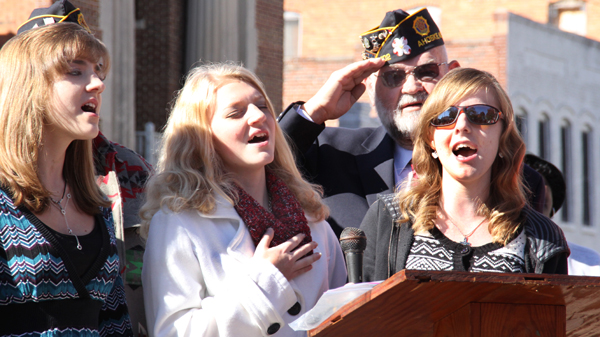 With Post 102 Commander Steve Vinson saluting in the background, the Eyes of Emiline perform the National Anthem at Monday’s Veterans Day ceremony in downtown Ahoskie. Staff Photo by Cal Bryant

AHOSKIE – Tell them now; respect their service now before it’s too late.

That was the advice of Patricia Harris, Department Commander of the North Carolina American Legion, who delivered the keynote address here Monday morning during a Veterans Day program hosted by Hertford County Legion Post 102.

Standing in front of one of the largest crowds ever to attend the annual Veterans tribute at Ahoskie’s No Man’s Land Park, Harris reminded the audience that every day, more than one active-duty military member commits suicide.

“We’re losing more service members by their own hand than we are by the enemy in Afghanistan,” she said. “Those who have experienced the horrors of combat first-hand can understand why most of these young men and women feel compelled to take such drastic and permanent measures. In some cases, combat may not be the reason (they resort to suicide).

“We need to let all veterans know, while they are still with us, that we love them and we appreciate them,” Harris continued. “We are grateful for their service. It’s up to us to make our veterans feel that his or her service to this country is appreciated by their fellow Americans.”

Harris stated there are many intangible ways to pay tribute to that service.

“The easiest and simplest way is just to say thank-you,” she suggested. “I say that to those who fought before me….thank-you for your service; without you I don’t know where we’d be today.”

Harris remarked that her father, now deceased, is a veteran of World War II.

“We cannot forget those men and women…the greatest generation this country has ever known,” she said. “And our Korea and Vietnam veterans, I say welcome home to you. I say welcome home to our Iraq, Iran, and Afghanistan troops, and to those who served along with me in the first Persian Gulf War.”

Harris added that while the day was set aside to honor military veterans, traditionally those who have served in times of past wars and during peacetime as well, Americans also need to honor those on the front lines of today and those preparing for tomorrow’s battles.

She went on to remind those in attendance that the American Legion proudly stands alongside veterans of the past, present and future.

“We will fight for you….fight to ensure you and your families receive the benefits you so rightfully deserve,” she stressed. “And if a veteran has made the supreme sacrifice, please remember that price they paid with their lives. Remember them and keep their families close. We should never forget them.”

Harris mentioned the battles that Americans do not have to fight because of a strong military presence often deters a threat to the American way of life. Along those lines, Harris praised the efforts of the U.S. Coast Guard, the Navy’s aircraft carriers, squadrons of U.S. Air Force jets, and the U.S. Army and U.S. Marine soldiers constantly on patrol.

“Let us always treat our 22 million veterans as the saviors of our country, even when the guns are no longer firing. God bless America and God bless you,” Harris concluded.

Harris, US Army (retired), was among the “first boots on the ground” in the initial invasion of Iraq.

Bertie County Schools officials have fired a substitute teacher after she was caught on video cursing and threatening a student.... read more