Zarreyant Newsome, 16, of 134 Pinetops Road sits in the Hertford County Jail under a $201,000 secured bond after he was arrested Wednesday in connection with a rash of break-ins and thefts in his neighborhood. 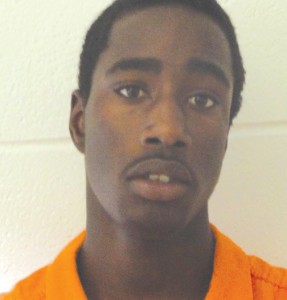 “We’re glad to get this young man off the street before he was able to commit another crime or before something more serious occurred,” said Hertford County Sheriff Juan Vaughan.

Since mid October, Vaughan stated that his office had been investigating a number of residential break-ins and larcenies, to include weapons and vehicles, on or near Pinetops Road. One of the break-ins occurred at a business.

Newsome is believed to be responsible for five break-ins on Pine Street, located off Pinetops Road. That string of crimes began Oct. 16 at 105 Pine Street and 106 Pine Street where several items were stolen, to include a Playstation and several games. Newsome stands charged with felony B&E (breaking and entering), felony larceny and felony possession of stolen property in each of those cases.

Two more B&E’s occurred on Oct. 22 – one at 113 Pine Street where clothing was taken, and the other at 625 Pinetops Road where jewelry and one gun were stolen. For the 113 Pine Street crime, Newsome was charged with second degree burglary, larceny, and possession of stolen property. At 625 Pinetops Road, he was charged with felony B&E and larceny, and felony larceny of a firearm.

A residential break-in at 117 Pine Street on Oct. 30, where cash and a gun were stolen, resulted in Newsome being charged with felony B&E and larceny, and felony larceny of a firearm.

Producer’s Cotton Gin, located at the corner of Pinetops Road and Benthall Bridge Road, was the scene of a break-in on Nov. 4. There, an attempt was made to break into the main office. While that failed, a warehouse was entered, as were four parked vehicles at the business. A John Deere 5330 tractor was stolen; recovered the next morning across from a residence on Pine Street. In that crime, Newsome was charged with four felony counts of B&E of a vehicle, one felony count of B&E of a warehouse, one felony count of attempted B&E, and two counts of misdemeanor larceny.

One day later (Nov. 5), Newsome is alleged to have entered a residence at 120 Pine Street where he took the keys to a Dodge pick up truck parked in the yard.

“When we arrested him, he told us where the truck was….located off Phillips Road near Conway; where we found it had been wrecked,” Vaughan said.

For that crime, Newsome was charged with one felony count each of B&E, larceny, and larceny of a motor vehicle.

Newsome made his initial appearance on Friday in Hertford County District Court.

Vaughan praised the work of HCSO Investigator Brian Pearce and HCSO Sgt. John Joyner for their work in the case.