The loss of a legend

CONWAY – Over a span of 50-plus years, Dr. Joe Fleetwood delivered as many babies as it would take today to rival the populations of Jackson, Lasker, Severn, Seaboard, Woodland and his hometown of Conway combined.

By the time you add the tens of thousands of patients he treated for a wide variety of ailments since 1950, it’s safe to say he touched the lives of the total citizenry of the entire Roanoke-Chowan area and a few other counties to boot. 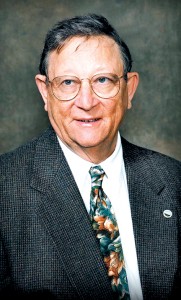 Funeral services will be held at 11 a.m. on Saturday, Oct. 12 at Conway Baptist Church. Burial will follow in the Town of Conway Cemetery with Bridgers Funeral Home in Conway handling the arrangements.

Even though he was retired, Dr. Joe’s medical legacy remains as strong today as it was when he first joined his now late father – Dr. Joseph Anderton Fleetwood, Sr. – in practice in a small building in downtown Conway. His work ethic, like that of his father and other doctors of the same era, did not go unnoticed.

“Dr. Fleetwood was an old timey family doctor,” said one of his peers in the medical field, Dr. Charles Sawyer of Ahoskie. “He did obstetrics and saw people at home.  He was a different type of physician than we see today.

“Dr. Fleetwood was a dedicated physician who worked many years providing health care to the area without any concern for fees or collecting payments.  He was a true gentleman and will be missed by everyone,” Sawyer added.

“I knew Dr. Fleetwood from working with him at the hospital from 1958 until he stopped in the 1990s.  Dr. Joe was a very dedicated doctor, Southern gentleman, and friend to all. He led a wonderful, exciting life in medicine, with the U. S. Navy, and his family,” stated Dr. Fred Saunders, a retired physician living in Aulander.

“Dr. Fleetwood was a wonderful example of a family physician.  He cared for thousands of people from birth to death.  He was always there for his patients in any way that he was needed.  I feel very blessed to have practiced in this area during his career and having him as a role model and mentor. There will never be another Dr. Joe,” said Dr. Michael Alston of Murfreesboro Primary Care.

Elbert Long, who serves as Chairman of the Dr. Joe Fleetwood Scholarship Fund, praised Fleetwood for his long tenure of service to the local community and beyond.

“Our community has lost a special and dear friend who devoted his life to helping others through his medical profession,” Long noted. “His legacy will continue through the Dr. Joseph A Fleetwood, Jr. Scholarship Fund which was started in 1999 and will continue for many years to come.”

In 1999, the Dr. J. A. Fleetwood, Jr. Scholarship was established by citizens of Conway and surrounding areas for students from Northampton County pursuing a career in a medical related field in hopes that they would return to Northampton County as he did years ago.

“He was a major part of our community and was kind of a dying breed. He knew more about you than most other doctors today know about you.  It was just the little things.  He touched a lot of people,” Bolton stated.

“When he retired we had a Dr. Joe Day here in Conway. It was a huge day, a lot of politicians came out,” the Mayor recalled.

Sue Lassiter, President of Vidant Roanoke-Chowan Hospital, said Dr. Fleetwood was a member of the R-CH medical staff for over 45 years.

“He was dedicated to his patients and we honored him during our 60th Anniversary for his devotion to providing quality and compassionate medical care at our hospital,” Lassiter said. “In his 50 plus years of practicing medicine, Dr. Joe delivered over 3,000 babies born at home and in the hospital. He will be missed among the medical community and remembered as a beloved family physician in our area.”

Dr. Joe was born November 11, 1925 to Dr. and Mrs. Joseph Anderton Fleetwood, Sr. After the elder Fleetwood completed his internship and medical school in 1921, he moved to Conway and opened his own practice, located where the barber shop was on Highway 35. Fleetwood Sr. stopped practicing medicine in 1979 at the age of 85. He later died of cancer.

Dr. Fleetwood Jr. had one dream in mind. He wanted to fly.

It was at the beginning of World War II when he attempted to make this dream a reality.

“I really didn’t want to be a doctor,” Fleetwood Jr. told this newspaper during a 2009 interview. “I wanted to fly in the Navy.”

The Japanese had just attacked Pearl Harbor, an act that solidified the U.S. military entrance into the global conflict and instilled a sense of patriotism in American society.

Though he had the dream, it was dashed after Joe Jr. took a simple military entrance exam.

“At that time, the war had just started, and I took an exam to fly and it turned out I was not qualified to fly because of my eyes,” he said.

Dr. Fleetwood Jr. attended his father’s alma mater, Wake Forest University, and it was yet another test that determined his fate.

“I took an aptitude test and I knew enough about medicine that I decided that’s what I wanted to do,” he said. “So I decided I would go into medicine.”

The young Fleetwood Jr. made plans to attend Bowman Gray Medical School on the Wake Forest University campus in 1944.

By December of 1947 he had earned his medical degree.

“I told the medical school I was going to join the Navy,” he said. “I interned in Richmond and I joined the Navy then.”

The first place he was stationed at was the United States Naval Academy (in Annapolis, Maryland), where he served as a physician.

When his tour of duty ended in the Navy, Dr. Fleetwood Jr., like his father, returned home. Between them they would see upwards to 50 patients a day in the office….not counting the number they would treat by making house calls.

He would briefly leave home again for another tour of duty with the Navy, this time on “Operation Deep Freeze,” which took him on board an Icebreaker to Antarctica. He said he spent 33 years in the Navy, most of which was with the Navy Reserves. He even treated the famous Admiral Byrd.

Joe Jr. continued the Fleetwood medical legacy long after his father’s death, finally calling it quits for good in 2006. His legacy may be summed up like this…..he always liked to get to know his patients on a personal basis and his patients considered him a part of their family.

Dr. Fleetwood is predeceased by his wife, Pat Poindexter Fleetwood, and a son, Douglas. He is survived by three sons: Andy, Billy and Charlie; and several grandchildren.

The child abduction case on Oct. 2 in Isle of Wight County may have a local connection. The Sheriff’s Office... read more