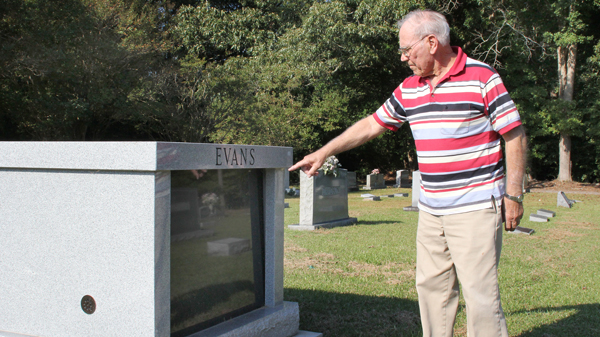 Harrellsville Mayor Robert “Bob” Dantz points to a panel kicked in at an unoccupied crypt in the town’s cemetery. Staff Photo by Cal Bryant

HARRELLSVILLE – Robert “Bob” Dantz is ticked off, and he has every reason in the book to feel that way.

Flowers were removed from tombstones and scattered on the grounds of the well-kept cemetery. Other flower urns were knocked over at the grave sites.

One burial crypt, currently unoccupied, had one side plate kicked (the shoe/boot print was still visible on Thursday of this week) and damaged. A tombstone had been moved at an angle on its granite foundation.

At another grave site, the tops of two cement flower urns were destroyed. A small angel attached to another tombstone was damaged. Flags marking the graves of military veterans were torn.

“I’m agitated at these idiots; low lifes, nothing but low lifes,” said Dantz, Harrellsville’s Mayor, in describing those responsible for the damage.

The only silver lining on this particular day was that a Good Samaritan, or more than one, had cleaned up the scattered flowers and returned the flower urns that were knocked over to their upright position.

The damage was discovered Sept. 27 by Harrellsville resident Lisa Perry who had arrived at the cemetery to visit the graves of her parents.

“She saw the mess and contacted me,” Dantz said.

“It made me mad; I immediately drove back to town to let the Mayor and others know what had happened here,” Perry said. “I brought a trash bag with me today to start cleaning up, but somebody had already beaten me to the punch.”

Dantz contacted the Hertford County Sheriff’s Office. A deputy soon arrived to survey the damage and file a report.

All totaled, damage was inflicted to 10 grave sites.

“I just don’t understand what drives a person to do something like this,” Dantz stressed. “The families, the survivors, of those buried here don’t deserve this; they didn’t do anything to prompt such vandalism, the desecration of these graves.

“To the ancestors of those buried here, this is a sacred place; this is the final resting place of their loved ones….why would anyone in their right mind come here and do this, tear up this sacred ground,” Dantz concluded.

Those with information on the individual(s) responsible for the vandalism at the Town of Harrellsville Cemetery are urged to contact the Hertford County Sheriff’s Office at 252-358-7800.

Arrests made in Como break-ins

WINTON – A rash of residential break-ins in two states appear to be solved with the Wednesday arrests of two... read more