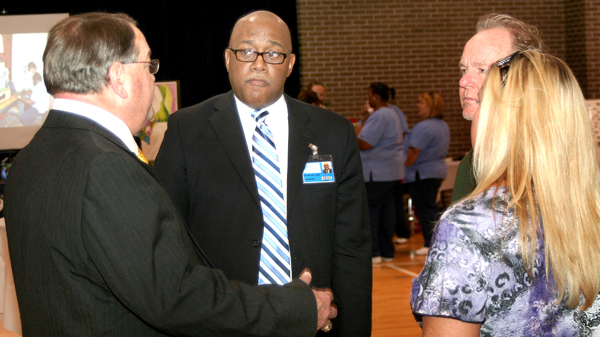 Dr. Michael Elam (second from left) was the center of attention on Tuesday during a reception held in his honor as the new president of Roanoke-Chowan Community College. Staff Photo by Gene Motley

AHOSKIE – The open arms are for more than hugs.

Roanoke-Chowan Community College along with the Chambers of Commerce of Murfreesboro, Windsor, and Ahoskie sponsored a Reception/Business After Hours at the college on Tuesday evening and the biggest hit of the late afternoon was the college itself.

The event, held at the Multipurpose Room/Gymnasium of the Student Services Center, was highlighted with a few words from the college’s seventh president: Dr. Michael Elam.

Elam took the stage shortly thereafter and expressed his gratitude for the turnout of civic, business, and political leaders from across the Roanoke-Chowan.  He also expressed what RCCC has to offer and the bright future he foresees for the college during his administration.

Ringing the gym floor that evening were displays, booths, and handouts of many of the curriculum programs offered by the college, including Nursing, Emergency Services & Public Safety, Fine Arts, Cosmetology, and Continuing Education, among them.  A few of the departments even donated the door prizes that were raffled off during the evening.

“I’m tremendously excited about this evening because this is an exciting, innovative, and interactive opportunity for people to come and find out what Roanoke-Chowan Community College has to offer this community,” Elam said in a short interview prior to the event. “Of course I’m happy to be here, to be serving as the seventh president, and I want to do everything I can to make this a world-class institution.”

Elam, a native of Henderson in Vance County, is the seventh president to assume the reins of the school since the college was founded in 1967. He began his tenure in mid-June upon leaving the Louisiana Community and Technical College System, where he served for years as Vice President of Strategic Initiatives.

Part of the President’s greeting party included his wife, Maxine, and his daughter, Mikala, who came from her home in Pennsylvania, along with one of Dr. Elam’s grandchildren.

“It’s important for the people to know that I’m a part of this community,” Elam continued. “My wife and I are transitioning into this community and we’re just as much a part of it as everyone else is around here.

“So we have a vested interest in making sure we provide the services and the programs that will help this community grow; not just our service area, but the entire northeast (of NC) that’s kind of been left behind by the whole state,” the new president emphasized. “We want to bring attention back to it and we want to make this a robust part, a significant part, of North Carolina.”

Before he arrived in Hertford County, Dr. Elam served as Interim Chancellor for Central Louisiana Technical Community College, and Sowela Technical and Community College in Louisiana. Prior to that, Elam served as the sixth President of College of the Mainland in Texas City, Texas, a single campus district serving the 13 cities of Galveston County with an approximate enrollment of 13,000 students.

With more than 32 years of experience in higher education, Elam holds a Bachelor of Science in Zoology and a Master of Education in Student Personnel and Administration from Howard University in Washington, DC.  Elam received his Doctorate of Education in Higher Education Leadership from Nova Southeastern University in Fort Lauderdale, FL.

Elam says he’s aware of RCCC’s service area – state-mandated areas where certain community colleges and technical schools have the rights to provide curriculum. These include offering continuing education,  as well as courses that can be transferred to a four-year college.

“We definitely have some wonderful partners with Halifax, with the College of the Albemarle, and with Martin (Community Colleges),” he added. “All of those presidents, we’re all good friends and we do things to collaborate together to make it work well for everyone; and that’s what it’s all about: partnering and making sure that we are good stewards of the taxpayer’s dollars and to do great things here in this community.”