ELIZABETH CITY – As a District Attorney, Frank Parrish was often praised for the respect he paid to those crossing his professional path each day.

As a devout Christian, Parrish wasn’t shy about his religious convictions. 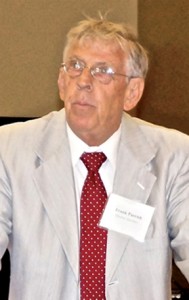 Frank Parrish served as DA for the First Judicial district since 1994.

On Sunday, northeastern North Carolina lost this gentle giant at the age of 64 as he died suddenly in Elizabeth City.

The news of his sudden death shocked many of his colleagues within the judicial ranks.

“Frank’s passing is a tremendous loss, not only for us here in Gates County but throughout his district and beyond,” said Gates County Clerk of Court Nell Wiggins.

“We worked so closely with Frank and his office for a long time; I just can’t imagine that office without him, without his warm smile and caring spirit,” she added.

Wiggins said among Parrish’s most endearing qualities was how he always listened and was very thorough in his response.

“Whenever I had a question, he was always so gracious, taking his time to explain the answer,” she stressed. “He was like that with everybody. He loved his work.”

“I have known Frank for the past 20 years and was very saddened to receive the news Sunday night about his passing,” stated Valerie Asbell, District Attorney for Judicial District 6B. “Frank was a great friend and colleague and the epitome of a southern gentlemen.  He was a great prosecutor and a fierce advocate for victims of crime. I consider myself very fortunate to have known him and been exposed to his wisdom and quick wit.  It was my honor and privilege of knowing and serving with him.

“My thoughts and prayers are with Kim, Jason, Erin and other family members and friends during this time.  The State of North Carolina has lost a great man,” Asbell concluded.

“The attorneys and staff of the District Attorneys’ Office are deeply saddened and shocked at the sudden, unexpected death of our mentor, leader and friend, Frank Parrish,” read a statement released by his office early Monday afternoon.  “Frank was the consummate professional, a true gentleman and a role model for all of us here in the District Attorneys’ Office. Frank treated everyone with respect and lived every day of his life as a devout, practicing Christian. In fact, on the morning of his death, he served as the lay reader at his church as he often did.

“Each of us mourns the death of our boss, but more importantly we mourn the loss of our friend. His passing will leave a void in our office, in our community and in our hearts. Our prayers are with his wife, Kim, as well as with his son, Jason and daughter, Erin.

“Finally, we want to assure the residents of the seven-county, First Judicial District that the assistant district attorneys and the professional staff of the District Attorneys’ Office will be available to address your needs during the coming days and months,” the release ended.

He was awarded the “Outstanding Trial Lawyer” award for Region IV, an 11-state region, as presented by the Association of Government Attorneys in Capital Litigation for the year 1993 -1994. Furthermore, he was a lecturer on “Sentencing Arguments in Capital Cases” in 1994 presented to Maryland State’s Attorneys Association and he was a lecturer for the annual North Carolina Criminal Evidence Seminar in 1995.

Parrish is survived by his wife, Kimberly, and two children, Jason and Erin.